The unrealistic expectations from protests in Nigeria 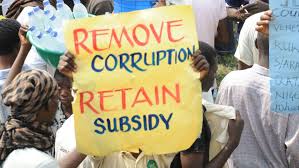 Crying is a way by which people, especially babies, express pain, discomfort, sorrow or need. Seeing someone cry draws our human emotions, empathy and urge to help the person crying. However, some children abuse cry to extort their parents to get or do everything they desire. When adults start crying like babies, instead of studying to understand and tackle the issues, they appear weak, noisy and toothless. Likewise, without understanding or creating systems for organic growth in the society, constant protests are overlooked as extortionist noise and empty threats.

Many Nigerians quickly resort to protests, insults, blames and ultimatums to demand different social services or actions from the postcolonial government. Like helpless babies or toothless bulldogs, they file out to protest after massacres, crises, blackouts, official looting or restrictive policies. Since they lack sustainability for these protests, they quickly disperse after some time or after government settles few of the conveners. These protests often use fire brigade approach for beginning with loud threats and agitations, which they cannot sustain. So, government officials learn to ignore or violently disperse the protesters without expecting economic repercussions.

Having a true right to protest

Consistent progress in a civil society grows on the principle of producing and exchanging goods and services. What gives you power to demand other people’s products is what you produce and can hold back when your demand is not met. So, if you produce rubber for tyres, tools and other gadgets, you earn a right to demand something from them. For your rubber contributes to agriculture from tractors, transportation from tyres and other industries and products that use rubber.

Like other users, governments require some portion of your products as tax for regulating the society or providing electricity, roads, schools and other products. Invariably, you must give something to get something, not just get something by crying, cursing and protesting. So, if you are not intellectually or materially relevant in the social network for productivity, you can be easily ignored. Hence, apart from the inalienable gifts of nature like your life and freedom, you must pay to get other people’s products.

Losing the moral right to protest in Nigeria

“You cannot eat your cake and still have it.”

By sharing in free foreign products received for holding down Niger-Delta communities for foreign exploitation, other people abandon their own resources. These are the resources they could have used for production to earn their living and right to protest or demand amenities. Now, they lack both courage and knowledge to retrieve and use their own resources for production. Also, they lose the moral rights to protest by supporting and depending on other people’s exploitation, while neglecting their own productivity. Thus, their protests and demands for more roads, electricity, jobs, schools, police stations, amenities and even security can be ignored.

A government that robs Peter to pay Paul always count on Paul’s support to rob Peter. Once you are dirtied sharing from other communities’ exploitation, you lose the moral authority to protest. You will remain pliant to their humiliation and manipulations, “for once you do what they want, you won’t be able to do what you ought.” And your cries of marginalization or not getting ‘enough’ shares from exploiting others will remain as hypocritical as asking for more share from a robbery.

How effective are protests in Nigeria?

Protests are aimed to get the government to act in a certain way, or restrain from some actions. When productive people unanimously and sincerely reject something or demand something from a tax-receiving government, government yields. This is because their protests can extend to refusal to work and crumbling of the economy.

But, due to lack of productive network in Nigeria’s exploitative formation and administration, Nigerian protests lack united front. So, when a section protests, other sections counter, mock or frustrate them in retaliation for previous betrayal. By sharing consumption, government exploits the differences in tribe, religion or party to keep people distracted from having a productive common purpose.

So far, Nigerian governments view and treat protests in Nigeria as negligible and temporary noise. Some others enact laws to ban protests as “distractions to their functions.” While Nigerians who either benefit or are untouched by immediate tragedies regard them as foolish disturbances.

What are the better alternatives to protest?

“He who comes to equity must come with clean hands.”[4]

To demand anything apart from your free gifts of nature or cultural heritage, you must have something to trade for them. But neglecting your ancestral lands and possibilities, in pursuit of other people’s resources, robs you of your transactional power and potentials, and renders your protest insincere.

A sincere alternative to protests in Nigeria will be educating your people to develop a system for them to discover, own and utilise their potentials and resources for sustenance, trade and tax. [5] Getting the right to your lands and resources requires allowing others to retrieve and use their own resources for productivity, trade and tax. Thus, Confucius states that “he who wishes to secure the good of others has already secured his own.” Though many of us are used to benefiting from the exploitative system, we will develop the courage to have our own productivity.

But, as long as you expect benefits from Nigeria’s exploitative system, you will not have the courage for true protests. And Nigerian government will not take you more seriously than some cups of rice and coins to be tossed around. “He who rides to power on the back of tiger will soon end in its belly.”

[4] Maxim, in The free dictionary, www.legal-dictionary.thefreedictionary.com/%22He+who+comes+into+equity+must+come+with+clean+hands.%22