CONSTITUTION AS A PLAN: the story of Rimea and Igena communities 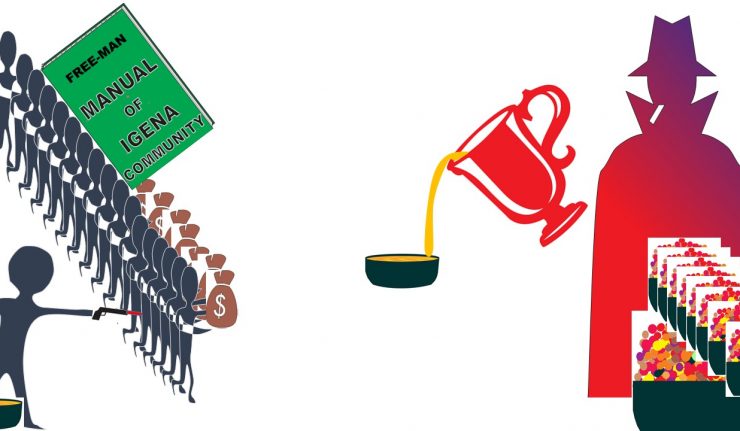 There are so many beautiful laws deriving from the Nigerian constitution. Yet we continue to wonder why these laws have not taken care of the moral and civil problems in our society, and has not brought the required peace and progress in Nigeria. The more the national assembly amend and tighten the law, the less it is known by the people and the less it is able to address the social issues of political instability, religious crisis and economic stagnation. This brings us to the discussion of constitution as a plan between members of a community for their own good using the stories of Rimea and Igena communities.

In the fifth episode we spoke about constitution as a manual given to users by a higher authority. And we considered whether it is better for manuals to be written before or after the production of an entity. We noted that the transfer of a manual to another person is a first testament of dependence of the receiver on the giver in the subject-matter for which the manual has been made. Today, we are speaking of constitution as a plan between different members of a society.

A plan is defined as a set of things to do in order to achieve something, especially one that has been considered in detail in advance. When a plan is made between two or more people, and is officially binding on them, it is regarded as a contract or a legal agreement.

I shall use two different stories to illustrate the concept of constitution as a plan.

The first story is the story of Rimea community which had 13 neighbouring families, and have been interacting with one another, trading their knowledge, goods and services with one another. One day, a foreigner came to the community and desired the fruits in their land. So the stranger asked to take over the fruits in their land. When the families refused, the stranger brought his gun and started shooting the whole members of the 13 families in Rimea community. So the remaining ones surrendered the right to their lands out of fear of death. The stranger converted the members of the Rimea community to slaves and began taking away the fruits of the community without minding from which family the fruit came. At a point, the original families in the community got fed up with the life of slavery even in their own land. So the heads of the 13 families joined forces together and fought the stranger fiercely. They forged their own weapons, fought the stranger with all their power, defeated the stranger and each family took back their land and fruits in order to continue working to improve their lives. When they had defeated the stranger, the heads of the 13 families came together to plan and agree on how to live from then onwards. They all followed the plan they had together, and whenever the plan does not work out, they changed the plan and continued to make progress in the extraction and processing of the fruits in their specific lands.

The second story is the story of Igena community which had 17 neighbouring families, and have been interacting with one another, trading their goods and services among themselves. One day, a foreigner came to their community and desired the fruits in their land. So the stranger asked to take over the fruits in their land for small exchange of mirror, ceramic plates, cups and others. The families initially agreed to the exchange since many of them had not seen mirror or cup before. However, they later discovered that it was not profitable exchange and resisted the exchange.

When the members of the Igena community got fed up with the life of slavery in their own land, they complained to the greedy stranger about their desire to become free. So the stranger advised them to be a little more patient so that he can guide them on how to use their freedom when he gives it to them, and so that they will maintain order and continuous supply of fruits to the stranger’s land. So the stranger cancelled the ‘slave’ which he wrote on the slave-manual for Igena community, and re-wrote free men manual for Igena community. He opened the first page and wrote ‘you are now a free man’ before handing the manual over to the families who he appointed to represent the whole families in Igena community. However, the original conditions for exploitation did not change: the user manual still maintained that the families will not have individual rights over their lands, especially when those lands contain the fruits desired by the stranger. The stranger also handed over his gun to a member of one of the families in order to maintain obedience and strict adherence to the system of supply of fruits to the stranger.

The brother with gun now appointed 13 obedient representatives out of the 17 families to agree on how to adjust but still remain together under the manual of the stranger. Everybody gathered out of fear, and would not argue because of fear. The other families who were not even represented had no option than to fearfully accept the conditions in the new plan, which was made to correspond with the manual of the stranger. Since then, the families have not been able to free themselves from the stranger’s manual nor to own the fruits in their lands. After adjusting the stranger’s manual over and over again, nothing seems to change.

In summary, it appears that there is a new form of slavery in Igena community, where the family with the gun is the favorite slave of the stranger, and is in charge of the other slave families. They are not allowed to eat the fruit or to make fruit juice from the fruits in their land. They can only struggle to buy little portions of the fruit juice when it has been made and packaged by the stranger for them to drink.

It seems I have forgotten how the story ended, however, I am giving you an assignment

Thank you for following the 6th episode of Restartnaija, Make sure you share this video with at least 10 Nigerians who are capable of social reasoning. Next week we shall discuss the difference between constitution as a manual for a society and as a plan by the society, in order to determine which one should work for peace and progress in a society.

Tags:nigerian constitution
previous article
CALMING THE STORM AND WORKING WITH THE OPPOSITION
next article
Reasons for insincere data collection in Nigeria