NIGERIAN CONSTITUTION: an agreed plan or a dictatorial manual 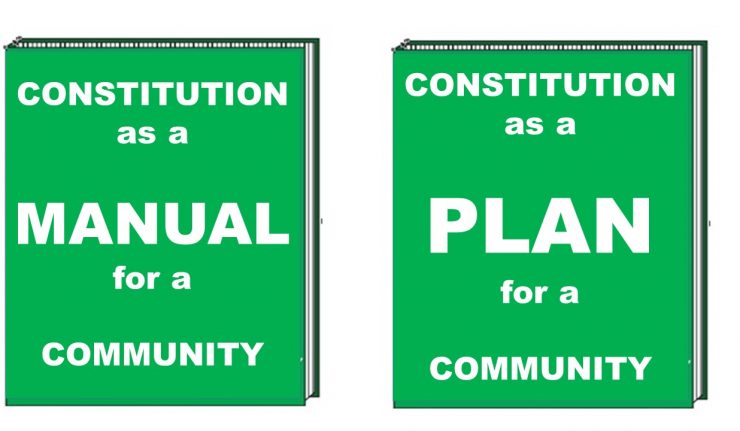 There has been a lot of expensive drama involving the legislative arm of our federal government. The drama intensifies the heat and show of power between the executive and the national assembly. From senate president to EFCC handler, suspension of senators to summon of custom boss and executive officers. During the tussle, the custom boss demands to be shown a constitutional reason for wearing the office uniform. The custom boss advised the senate to consult the Nigerian constitution before they take positions.

DIFFERENCES BETWEEN CONSTITUTION AS A MANUAL AND AS A PLAN

1. Constitution as a manual is seen as a commandment, while as plan, is a free agreement.

EVALUATION OF NIGERIAN CONSTITUTION: a manual or a plan?

1. DOES NIGERIAN CONSTITUTION REFLECT A COMMANDMENT OR AN AGREEMENT?

It is obviously a commandment that was handed down by the colonial masters and has been reproduced with minor adjustments by subsequent governments. It still maintains the foundations of chaos for the present Nigerian society.

2. DOES IT TESTIFY the agreement between all stakeholders or the decision of just few “experts”?

Nigeria is said to be made up of more than 250 ethnic groups. Yet there is no account of any gathering in which the custodians of the ethnic groups agreed on how to live together. Was your father consulted on your behalf to be a Nigerian? Was your chief or king consulted on behalf of your family? Instead based on expert instructions, the constitution nullifies all cultural practices or laws that does not comply with its dictates.

3. DOES IT EXPRESS AGREED RIGHTS AND DUTIES of the ethnic groups and their citizens?

No, it expresses a generalized and almost unenforceable rights of citizens. Also, it takes away the due rights of the ethnic communities who have natural charge of the citizens.

4. DOES IT DICTATE TO US, or do we direct the constitution according to our circumstance and common good?

I leave you to answer that one.

From the ongoing distinctions, it is clear that our constitution is a manual that has been handed down through coercive decrees. If it were our plan, it will not be
so confusing that we would need so many interpreters.

Nigerians have made attempts to forge a plan from the dictatorial manual we have now. Yet, all the attempts have not yielded any positive fruits. This is because you cannot build a good and strong house on a faulty foundation. http://restartnaija.com/nigerian-constitution-agreed-plan-dictatorial-manual/