INDUSTRY AND ACADEMIA IN REBUILDING NIGERIA 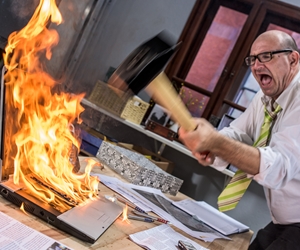 The effect of the biblical command of dominating the earth is felt daily in our world of steady scientific breakthroughs. Science and technology have alleviated human suffering over the past century: in transportation, telecommunications, automobiles, airplanes, construction and other sectors. All these advances are made possible by the adherence to scientific research and the courage in industrial technology. Using result of scientific research in the academia, industries manipulate physical objects for human good. Industry and academia combine to birth technological advancements in the world.

The relationship between industry and academia is similar to the relationship between the male and female reproductive systems. The male system produces semen that contains potent sperms. The healthy female reproductive system accommodates the semen, fertilizes some of the sperm with healthy eggs and supports the embryo till it becomes a matured baby.[3] As a potent male requires a healthy female system to accommodate and fertilize his sperm, so do scientific researchers require good industries to actualize and multiply the result of their research. And as a healthy female organ requires viable semen from a male system, so do industries require good research results to flourish and be more productive.

Every year, several million students graduate from different tertiary institutions in Nigeria.[4] The former Minister for Finance, Ngozi Okonjo-Iweala, reporting her finding from the National Bureau of Statistics said that no fewer than 1.8 million graduates in the country move into the labour market every year.[5] Many engineering and pharmacy students graduate with excellent grades and wonderful ideas. Yet the manufacturing industries in Nigeria do not employ these graduates, and can hardly boast of any real production. However, these same unproductive engineering graduates in Nigeria become very productive when they travel to the Western countries.[6] They fit in easily and record series of achievements that almost threaten the records of Western students.[7] This situation raises several questions on the bane of Nigeria’s productivity, whether it is from the academia, the industry or their mode of intercourse towards birthing a productive nation.

The fact that many Nigerian students flourish in industrial activities when they live outside Nigeria is an indication that the problem of unproductivity is not mainly a problem of academic impotence.

* Available labour force: capable and trained population, who are willing to work and learn

* A source of investment fund: for research and establishment of industries

The second and fourth conditions are neglected in Nigeria. The level of funding for research in Nigeria is too insignificant to effect a change. There was no allocation for research institutions in the 2016 national budget[1][1] Channels Television. February 12, 2016, 2016 Budget: Scientists Lament Zero Allocation To Research Institutions. http://www.channelstv.com/2016/02/12/2016-budget-scientists-lament-zero-allocation-to-research-institutions/

The fourth condition of access to raw materials is denied to researchers and for industrialists by the Nigerian Mineral and Mining Act.

“All lands in which minerals have been found in Nigeria and any area covered by its territorial waters or constituency and the Exclusive Economic Zone shall, from the commencement of this Act be acquired by the Government of the Federation.[10]…“No person shall search for or exploit mineral resources in Nigeria or divert or impound water for the purpose of mining except as provided in this Act.” [11] “The property in mineral resources shall pass from the Government to the person by whom the mineral resources are lawfully won, upon their recovery in accordance with this Act. ”[9]

Unfortunately, not many Nigerian bright researchers and industrialists have the political connection and money to win access to mineral resources. Instead, the Nigerian government send these resources to foreign countries in exchange for raw cash.

It is more of a problem of insufficient demand of academic research results from collapsing industries. Nigerian industries (without access to raw materials for primary production) make little demand on academic researchers, leading to the underutilization and neglect of research institutes in Nigeria.

The condition of industry in Nigeria which is denied of access to funds and raw materials could be likened to the condition of a female reproductive system without fallopian tube and ovum respectively. No matter the amount of research result (healthy or unhealthy sperm) injected into the industry (female reproductive system), it cannot fertilize nor develop the scientific idea.

Tags:industry and researchNigerian industryNigerian research institutes
previous article
Should Nigerians still sacrifice for the state, and not to put themselves first
next article
Fallacy of secession and the arbitrary maps of African nations