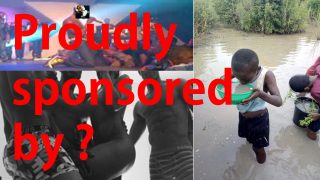 Jungle justice: the death of light in the society 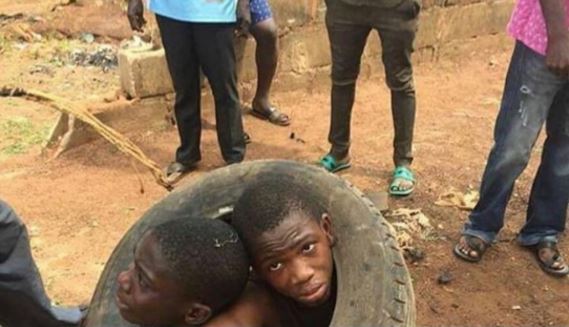 Jungle justice does not bring social justice, it destroys the justice it sets out to create. A part of our humanity dies whenever a human being dies in such horrible pain and misery at the hands of fellow men.

What do enlightened parents do to their children when the children misbehave, fight or steal at school? They evaluate the conditions of their children, the company the children have been keeping and other causes that could have influenced their children into bad behaviours. When a citizen is good, he becomes everybody’s relative: my sister’s friend’s cousin’s nephew’s room-mate’s uncle is Chinua Achebe. Una weh done Sirs! However, when the citizen turns out bad, it seems that he has no relative on earth. Only an inconsequential few consider the influences on the citizen like enlightened parents, in order to rehabilitate the citizen. The most recent treatment for citizens who display bad behaviour is lynching abi na jungle justice dem call am. 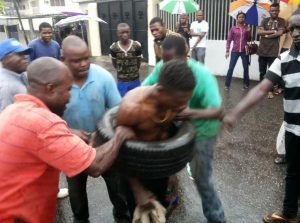 Around 2005, a young boy known as Uwa-mgbede was burnt alive for stealing a phone in main market Onitsha. Another young man was beaten, stripped and killed for stealing a packet of Maggi seasoning at upper Iweka. About the same time many social miscreants were offered as burnt sacrifice to the gods of righteousness, by the MOST HOLY men and women in other places like Aba, Lagos, Benin, Calabar and Kano. After the roasting of Uwa-mgbede at main market, the economic condition of the market or state did not improve. Instead, his former colleagues and friends devised smarter ways of robbing and revenging on the society for the demise of their unlucky friend, uwa-mgbede.

Since the wages of sin is death, according to HOLY PEOPLE, it is justified to kill these miscreants immediately. This will forestall any chance of their escape or release when handed over to the police. “Yes it is good to pay them back and teach them a lesson. They are poor, unskilled and without jobs as sustainable means of livelihood; and so what?! Are we their mothers who could not give them befitting education and home training? Are there no other people who have worse situations but are selling ‘pure-water’ to survive?” I don hear una, una weh done.

The society is a pool from which everybody fetches drinking water. The level of development of the human beings in a society determines the level of peace and progress to be obtained in that society. We seem to justify the selfishness and social irresponsibility hidden behind the jungle justice. Their inability to obtain education, skills and sustainable means of livelihood is not their problem alone, but the problem of the whole society. Unfortunately, we (churches, politicians, philanthropists and others) hide behind their condemnation as irredeemable devils to neglect the duty for which we have been sent to the world. This is the duty of creating an enabling social structure for human development. By adopting, educating and empowering abandoned children, Anja Lovren, the Danish orphanage keeper, saves Nigeria from more future terrorists, and burnt offerings to the Nigerian gods of I-HOLY-PASS.

The first evil has been done by the colonial masters who, like programmers, have set a discordant political structure; a structure that denies citizens the access to their raw materials for research and production.

The second evil is continually perpetrated by indigenous collaborators (politicians who support the “Nigerian Mineral and Mining Act” of exploitation and those who stand in for the foreign exploiters).

We commit the third evil (cowardice and compromising pretence) by keeping calm under the exploitative structure once we get our own small share. Recently, we see the exorbitant lives of collaborators to this condition, we hail them in churches, cities, songs and dramas to get more egunje.

We commit the fourth evil by failing to develop the lower victims of the social structure at the tender stage, only to lynch them at the higher stage.

“There is no man so worthless that he cannot be made good for something. We have a right to kill only those who cannot be preserved without danger.” Jean Jacques Rousseau. Unfortunately, we have not made meaningful and justifiable efforts towards developing them before giving them up to jungle justice. “Social justice cannot be attained by violence, violence kills what it intends to create.” John Paul II

Tags:jungle justice
previous article
Fallacy of secession and the arbitrary maps of African nations
next article
Judiciary in the making of a new nation