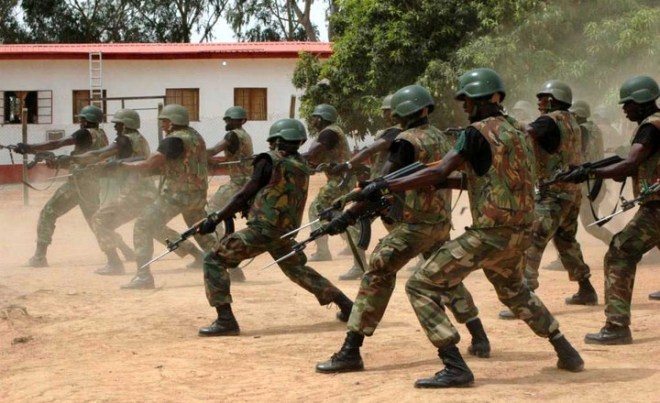 Who are these men (and women) of the armed forces? Are they humans at all? Do they even have human emotions, understanding and loved ones? Are they affected by rough societal situations like other people or are they just remote-controlled-robots, just following orders? Whether army, navy, air force, police, customs… all of them na armed forces abeg.

You bloody civilian: “Never tell a soldier that he does not know the cost of war,”[1] nor appreciate the value of life. He lives to fight and die, constantly suppressing the fear of death as closest mates fall in battle.To desert the troop in time of battle is cowardice; while dying for a noble cause is a mark of true heroism. Though he is human and afraid of pain, he does not hide behind his mama’s curtain, nor shoots bloated words from his keyboards behind the computer screen. He is the personification of strength and courage of a society and the banner of selfless sacrifice for the peace of a society. Yet, “without patriotic political education, a soldier is only a potential criminal.”[2]

The vocation to military life is not an easy call to answer. Human societies are constantly faced with threats both from within and outside their borders: threats to the societies’ lives, properties and values. The society’s existence, safety and dignity are always at stake, threatened by human and non-human forces. Hence, the need for defending a society remains a matter of primary importance for every society. Actions carried out in the process of defending one’s society can either sustain peace for the society, or position the society for immediate or later hostility. Perpetrating discreet or outright injustice in the name of defence is a guaranteed recipe for bitterness and reprisal attacks.

Thus, soldiers are trained not only to handle weapons effectively, but also make quick decisions that will ensure future peace for their societies. The ability to quickly assess situations and make sound decisions in few seconds is of utmost importance.  You have few seconds to judge between pulling the trigger, or resorting to other agreeable options like negotiation; few seconds that decides the destiny of nations; few seconds to distinguish between a disguised enemy or an innocent person; few seconds’ hesitation and you are fallen by an enemy’s bullet; or few seconds of misjudgement and you bear the scary blood of an innocent person on your soul forever.

I believe there are three main objects of social education: me, other human beings and resources / forces in the environment. A good social education is aimed at harmonizing the cooperation between these three objects for wellbeing and sustenance of all. Justice is the establishment of truth about these objects; while giving to each what they deserve is an extension of justice in form of reward, punishment, mercy or restitution. Without knowing the truth (both factual and pragmatic), no one may claim to have acted in favour of justice.

Unjustifiable armed force actions (authorised/unauthorised) can and have been excused for expediency sake in the name of national security. An armed force action will be unjustifiable when it violates a person’s human rights,[3] yet some sacrifice of human rights may be necessary for security. However, the frequency of excuse and outright justification for unjustifiable armed force actions bear indirect messages of irresponsibility and untouchability. The personnel who execute unjust armed force acts and orders are still human beings, beings of habit. They eventually carry on the mentality into other areas of life, families[4], church, market, hospitals, etc. The continuous defence of armed force injustice gradually but painfully sears and silences the consciences of force personnel. With seared consciences, they become oppressors of the citizens to whom they are supposed to be protectors.[5]

Observation of some armed forces operations in Nigeria and parts of Africa suggests an inadequate social education or seared consciences. Several armed forces’ utterances in Nigeria suggest a disregard or ignorance of the provisions of Fundamental Human Rights. There have been countless reports of ‘accidental discharges’, extra-judicial summary executions, outright massacre of women and children, random assault of protesters, brutalization, torture[6] and most recently, killing of Keke Napep driver in Maiduguri.[7] It might be excused that the force personnel saw the Keke-driver as an initial part of a terrorist ambush setup. Yet, like in several other occasions, no real/known institutional apology or remorse is shown even when the injustice are obvious.

In response to the opening questions, Yes, personnel of the armed forces are human beings; many of them still have active consciences; they are seriously disturbed by memories of men, women and children whose crying and dying voices they hear in their private times; they have human emotions and loved ones who they wish to stay and love; many of them are helpless in their effort to transform the institution for better service of the nation; many of them do not understand the height of human right abuse included in the constitution and laws they defend; many have been programmed to believe that they are fighting for a just cause and dying the best death ever; some only chose the armed forces vocation because of unemployment, mainly caused by the Nigerian Mineral and Mining Act.

They may not be the best, yet the society’s safety is at stake and someone has to brave the cold of the night, the hunger in the belly, the fear of death and the emptiness of the bank account to stand in defence of a society. That someone, that brave person, standing in defence is a personnel of the Nigerian armed forces. No matter how malformed the Nigerian society is, the armed forces have been sacrificing (often with inadequate pay) to her safety and dignity.

They deserve more care, respect, provision, humane and technical training to secure the peace, progress and true unity of the society. But until there is a true platform for the different ethnic communities to FREELY agree on terms and conditions for a national partnership, the armed forces remain defenders of an illegitimate union.

Please share with 5 intelligent Nigerians on WhatsApp bellow, or other platforms above