Many Nigerians have nothing more to lose 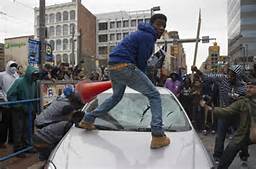 After leaving Malaysia, Singaporean citizens were bitter people who vandalized government property at any little provocation or riot. The government-owned property included houses where people rented and lived, the commercial buses, hospitals and other social-service facilities. Eventually, the government incorporated the citizens in the ownership of these property by keeping some percentage of the people’s salaries as payment for shares in the public property. The people were glad to be co-owners of the service-system in their country, who also obtained profit dividends on their shares. They began to patronize and advertise for the use of government facilities vigorously, since more patronage will imply more profit dividends on their shares. DURING ANY RIOT HENCEFORTH, THE SAME PEOPLE WHO USUALLY BURNT GOVERNMENT BUSES AND HOUSES, PROTECTED THE GOVERNMENT PROPERTY BECAUSE THEY HAD BECOME CO-OWNERS (SHAREHOLDERS) OF THE PROPERTY.[1] They had nothing to lose, now they have a lot to lose.

The worst people to have in the society are people who have nothing to lose.[2] These are people who have no tangible property to their names, no loved ones to defend, no dignity to protect or no worthy cause to live for. Some are empty, hungry, hopeless, mission-less or penniless that they consider their lives as meaningless. These set of people have been filled with bitterness and desperation from the negligence of the society. At this point of desperation, life becomes too meaningless that they would prefer to thrive by any possible means or to die trying. Instead of living meaningless and hopeless lives, they opt for any crime, adventure, cause or form that may give some meaning to their lives. They have been stripped, beaten, neglected, humiliated that they have nothing more to lose than their hopeless lives.

The society is the custodian of the people’s rights and liberties; and the citizens’ quality of life is an indicator of the social justice. By taking care of the social needs of its citizens, the society educates its citizens to be responsible for the society to which they truly belong, and from which they are sustained. People who get into the state of ‘having nothing to lose’ did not choose that life for themselves. They are created by the level of diligence or negligence of the society to its duty of protecting, developing, empowering and establishing the citizens for productivity and fulfilment.

The Nigerian society is replete with people who have nothing to lose. The Almajiri children who are products of poverty-stricken polygamous families; street kids who have not had the taste of family love or care from their single, careless or penniless parents; abandoned children who are left to die by the roadsides, or those who abscond from abusive and miserable homes; rich kids abandoned to the education of nannies, toys and media by their ever-busy and working-class parents; jobless youths who painfully watch the gradual waste of their youthful energy; grown people who are empty and without a noble cause/purpose in life; who only exist to eat, sleep, mate and brag. These category of citizens form easy recruits for cultism, terrorism, thuggery, robbery gangs and other social threats.

This band of people with nothing to lose are a time-bomb waiting to explode. Many Nigerian experts have spoken about the danger of both joblessness and emptiness among the Nigerian youth. However, rhetorical persuasion alone will never be enough. There is a greater need for new institutions, well organized, well-staffed, and well directed to follow up the exhortations and stirring speeches.[3] However, the chaotic structure of Nigerian politics makes it extremely difficult for any organic development to take place. The absence of distinct understanding and consequent agreement between the ethnic communities that form Nigeria has made it impossible to fully implement even a single policy since the beginning of Nigeria. One group agrees, the other disagrees and the internal battle that has kept us together in perpetual cold war continues to grow.

The first step towards human development and meaningful life in Nigeria will be a renegotiation of the terms and conditions for nationhood by the constituent ethnic communities. When a true agreement has proceeded from the people, the other policies on content and quality of education and general human development will become agreeable.

If you agree or disagree with the submissions, share the link to your contacts to evaluate the cause of hopelessness in our nation.