Role of the Military in Nigeria: oppression or protection? 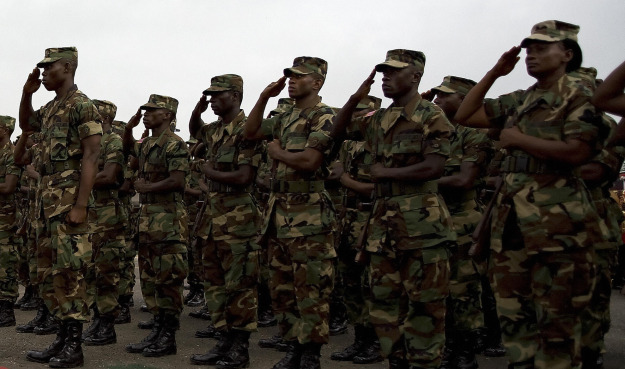 Before the beginning of the human society, a man found himself in an environment. He was lonely, hungry, naked and exposed to crude nature, thus he needed resources from the environment to satisfy his needs. He began walking around to find food and materials to cover himself until he saw a cashew tree with ripe fruits. As he approached the cashew tree to begin ploughing, he saw other people like him who were also coming for the same cashew tree.

They all jumped on the cashew tree and began ploughing fruits, leaves and sticks for food, clothes and private shelter. When the fruits began to reduce in number, they began to struggle and kill themselves for the cashew resources. It became a war of everybody against everybody, making their lives short, brutish, lonely and nasty.[1]

As they were living this life of constant conflict, death, uncertainty and loneliness among themselves, one of them suggested that they could cooperate and develop the environment instead of fighting and killing themselves for resources. So they all agreed to cooperate and develop the tree and environment for the good of everybody (common good). They outlined and documented the processes and duties for the progress of the society according to their agreement (constitution). They had society organizers, tree-planters, harvesters, leaf-cloth makers, resource distributors, wood-house-makers, herbalists, and finally protectors of the society from external attackers.

The role of protectors became necessary in order to defend the society’s resources and chosen way of life. The disorganized people in the story became a society by agreeing to cooperate and work together for development and common good. This story exemplifies how the military position arose from the people’s free agreement to work together and to protect themselves from external aggression. This brings us to the evaluation of military in Nigeria.

WHAT IS THE NIGERIAN MILITARY? MILITARY in Nigeria is an extension of the Royal West African Frontier Force (RWAFF) that became Nigerian when independence was granted in 1960.[2] The RWAFF was used to suppress the indigenes who were forcefully merged and exploited by the colonial powers. In 1956, it was renamed the Nigerian Military Forces, and handed over to the Nigerian government by the British in 1958.[3] After the civil war, the military expanded to about 250,000 in 1977, and consumed a large part of Nigeria’s resources under military rule for little productive return.[4] It further entrenched the existing military hold on Nigerian society and the military’s nearly first-among-equals status within Nigerian society.[5]

How legitimate is their function?

The main interest of the colonial powers in Nigeria has been access to the Nigerian mineral resources for their industries. The military was used to intimidate and subdue the people, while their resources were plundered. Hence, the colonial powers support any government that uses the military to ensure their access to mineral resources. This is the main purpose of the Nigerian Mineral and Mining Act, which takes away the people’s access to their resources. Today, military in Nigeria does not defend the people from exploiters, but defends exploiters from the people.

After Nigeria’s independence, successive Nigerian governments used the Military to suppress people’s attempts to leave the forced union. Their major role has been to keep Nigeria one by force of the gun, not reason, not agreement nor justice. The consistent suppression of the unwilling people in the union without a true agreement is an indication of illegitimacy.

Who are these people in the military? Are they not seeing and feeling the effect of foreign exploitation on the Nigerian society? They are seeing it and some are emotionally disturbed by the outcome, but they have been made helpless by blackmails and/or acquired habit of consumerism and fear of truth. Hence, some of them are highly compensated for their roles in ensuring the denial of resource access to their rightful owners.

Nobody was born as a military personnel. Each of them was born as a member of a planned/unplanned family in an ethnic community in Nigeria. They grew to see the poverty and miserable effects of the home-assisted economic clampdown on the society. Out of poverty, ignorance of the moral role of military in Nigeria, desperation or greed, they joined the military in Nigeria. Some of them continue to pray and hope to eventually join in the rank of rich generals. Those with goodwill, but incomplete information, have been convinced by exploiters that they are sacrificing for their country. They do not know they are sacrificing their society for foreign exploitation

How can they help?

The first step towards solving any problem is understanding the true causes of the problem. The first element of agreement in the society painted above was cooperation for productivity and common good. Many good people who have joined the military can begin to research on the end-product of their role as military. They can study the meaning of human rights and tendencies to freedom, productivity, fear, love and hatred. They can begin open debates and dialogues among themselves to find  better ways to encourage local productivity and fulfilment against foreign exploitation.

When people have access to their resources and can produce what they need, they will also depend on the military for defense. When Nigerians get back access to their resources for productivity, they will willingly require and appreciate the role of military in Nigeria. The military in Nigeria will equally be proud to protect a prosperous people who love and value them, instead of daily watching suppressed wretched and unhappy kinsmen who are waiting for an opportunity to have their revenge.