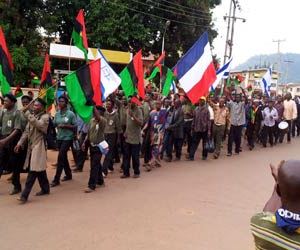 The shame of rampant joblessness among work-ready citizens of a society is not reserved only for the citizens. On the contrary, the higher the rate of unemployment in a state, the more the rulers should be ashamed of their titles. God gives every society resources which they utilize to satisfy their general needs in the society. Each society trains and organizes its citizens to develop and maximize its resources for the satisfaction of all citizens. The style of organization for efficiency is agreed by all, and handed over to some people as leaders to coordinate.

Nigeria’s foundation was not laid on the people’s agreement, but on brutal force and bloodshed of innocents. The brutal handlers of the Nigerian government devised tyrannical acts[1][2] to confiscate all the present and future resources in Nigeria. Hence, the government confiscates any land with mineral resources, even if it were someone’s own ancestral land. The lands are then heavily guarded for foreign companies to exploit. Yet, the government fails to take care of the totality of the citizens whose lands are auctioned to foreign companies.

Societies flourish when citizens are able to produce what they consume from the locally affordable resources in their society. Even when they do not have local resources, they develop their capacities to process mineral resources they import from others. But when citizens of a society do not have access to mineral resources (local or foreign) for production, they become idle and lazy. They become dependent and thus, greedy with the insufficient commodities from importation. Because there is no access to resources for production, these people remain poor, desperate and jobless Nigerians.

Old school teachers say that an idle mind is the devil’s workshop, abi na lawn-tennis court. In the state of poverty, desperation and joblessness, people are disposed to follow anybody with a better promise; they follow, whether the new messiah is genuine or fake. Hence, commentators who think they criminalize agitators by calling them jobless Nigerians desperately require better thoughts on government’s socio-economic responsibilities. Though government must not create all the jobs, government creates (un)conducive environments for (in)sufficient employment in production and distribution.

You say they should find something to do abi? Engage three of them in a sincere in-depth interview to appreciate the resilience of the men described as jobless Nigerians. You may find more able-bodied and minded graduates in the crowd than you expect.

Tags:Biafrasecessionists
previous article
Role of the Military in Nigeria: oppression or protection?
next article
Who you help? Just contribute to the reorganization for social justice in Nigeria