waiting for the dividends of democracy: the endless waiting 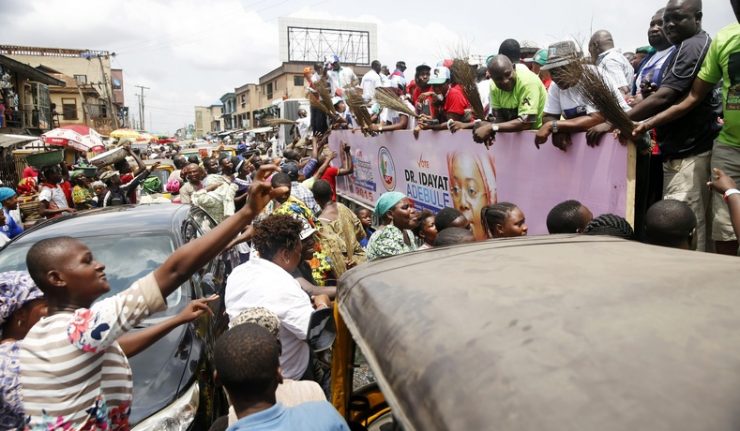 A kind-hearted man wanted to elevate some beggars in Ojuelegba-Lagos, so they can become productive instead of just begging. He gave some of them sizeable sums of money to start up small businesses to sustain themselves. After a week, he saw two of the beggars as they were begging in Ojota, some kilometres away from Ojuelegba. They had saved or spent the ‘business-capital’, and relocated to another spot to continue their usual business of begging. After this encounter, this man became hesitant of helping beggars, who sit down waiting for the dividends of democracy.

Listening to Nigerian electorate reveals a high level of passivity that can only perpetuate looting and underdevelopment in Nigeria. “The former governor built some roads, streetlights and hospitals for us, the other one gave us light, water and ShopRite. So we are waiting for a governor that will build roads, give us 24hours-light, share money and food for us. We are waiting for the dividends of democracy from our leaders, and that is what we must get.” Statements like these show why Nigerian electorates are deceived by politicians like prophets who promise them heaven in exchange for votes.

What is democracy? Democracy is classically defined by Abraham Lincoln as “a government of the people, by the people and for the people.”[1] It is a government in which the supreme power is vested in the people and exercised by them directly or indirectly through a system of representation usually involving periodically held free elections.[2] It is founded on the belief that all are equal, all are free, and all deserve a chance to pursue their full measure of happiness.[3]

Pursuing full measure of happiness is a constant activity which humans undertake every day of their lives. It is the state of fulfilment that comes from the self-actualization of the individual in the society.[4] The individual actualizes himself by developing his potentials to discharge specific tasks that distinguish him in the society.[5] By properly discharging the roles for which he has developed his potentials, the individual obtains financial reward and other social benefits. Because he has developed himself to contribute meaningfully, he is respected as a responsible member of the human society.

What is the dividend of democracy?

The dividend of democracy is thus, the provision of education, opportunity for gainful productivity and security of life and property. It includes the freedom for people to associate and contribute to deciding how their society is built and governed.

What do some Nigerians currently see as dividends of democracy?

The average Nigerian view of dividends of democracy may be inferred from the promises of victorious election candidates in Nigeria. This inference is drawn from the assumption that people vote for a candidate who has promised to meet their expectations.

In the last decade, candidates win elections by promising a monthly 5,000 naira to unemployed youths, food for school children, provision of light, roads, infrastructure and undefined employment.[7] These promises failed in addressing the main issues about the development and opportunity for citizens to utilize their mineral resources to produce what they need. They are like damage-control measures or placebo for distraction from the requirements for pursuing full measure of happiness. They appear like giving people fish, instead of teaching and giving them access to rivers for fishing.

What should be the expectation of Nigerian electorates?

Today, there is a huge production and infrastructural deficit for which the Nigerian government has continued to take foreign loans. Unfortunately, after borrowing, the funds are still paid back to foreign companies for the infrastructure, goods and services. Nigeria borrows to import fuel and agricultural machineries, to build roads, hospitals and many other depreciable things. Yet, Nigeria has lots of mineral resources as well as engineers who should use the mineral resources to produce what Nigerians need. Instead of developing Nigerians to process their mineral resources for production, Nigerian government auctions the resources to highest bidders, [8][9][10] eventually foreigners.

Nigerians must decide whether they are ready to work hard for productivity using their mineral resources or to wait for handouts. Those who seek fulfilment from their productive contribution to the society may begin to demand something different as dividend of democracy. Instead of demanding food, money, finished goods and foreign-installed infrastructure, the must demand ACCESS to their resources for production. They must demand proper education as development for using their mineral resources for producing what they need. If not, they will remain beggars who depend physically and mentally on handouts from politicians, foreign companies and charity organizations.

No president, governor, senator or representative can give us the full dividends of democracy if we are not ready to work. The dividends of democracy is the freedom to pursue our full measure of happiness. We are the ones to pursue it, and no one will catch it for us. For those who are waiting for a government that will provide light, roads, food, hospitals, water and all other, the wait may never end. No government can provide these things for you more than you can provide it for yourselves when you collaborate for productivity.

If you agree or disagree, please share this article and see what other Nigerians think about waiting for the dividends of democracy.

Tags:waiting for the dividends of democracy
previous article
Restartnaija holds its first inauguration of Crusaders for a New Nigeria
next article
Apocalypse of an ill-planned restructuring in Nigeria