machines create unemployment in Nigeria: fallacy of false cause 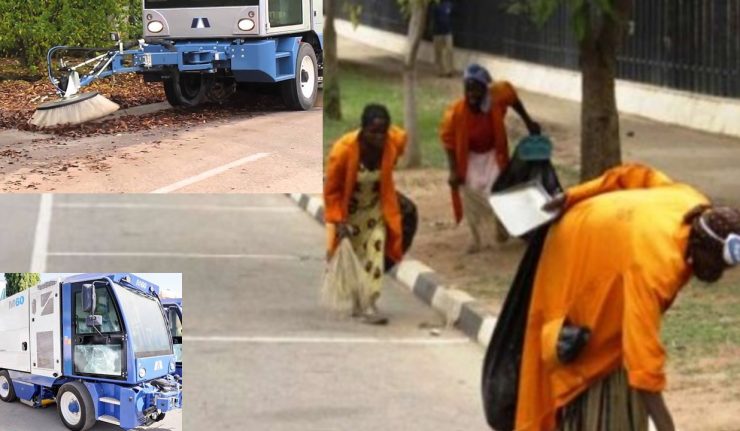 After Kano state governor Ganduje launched automated road sweepers,[1] commentators lamented that this innovation would increase unemployment by displacing regular road-sweepers. These commentators, who insist that machines create unemployment, frown at inventions that can replace human labour with machines and software. The people threatened by inventions are usually less-skill workers like tellers, gatekeepers, dish-washers, road-sweepers, agricultural and industrial manual labourers. With the recent testing of driverless vehicles, people are afraid of also losing driving jobs. Should people be threatened by the advancement of innovations, seeming that machines create unemployment?

Human society is formed by the agreement of members of a society to utilize their human and mineral resources for their common good.[2] This agreement for general satisfaction, social contract, became necessary to prevent the desperate struggle for resources in the state of nature.[3] In order to improve the process and output of their production, humans fabricated tools from bones, sticks, metals and other mineral resources. They even incorporated animals like mules, dogs and horses in the production of necessities for members of the society. And since then, humans continue to fabricate machines to increase and improve goods and services

It appears that high-scientific-inventions (artificial intelligence) are truly causing unemployment by displacing less-skilled workers, and denying them of livelihood. It may be concluded that those affected are mainly people, who were unable to study for highest-scientific skills. Most importantly, people whose livelihood are threatened by these inventions are people from the lower class of the society. For whether the children of the high-class study for the scientific skills, or not, their livelihood is never threatened. Instead, they are promoted to command the certified and skilled scientists on new researches and inventions.

The threat of artificial intelligence on people’s employment and livelihood is more of a socio-political problem than a scientific problem. Human society is formed by the agreement of the members to ensure collaboration towards multiplying and distributing their resources FOR COMMON GOOD.[4] Hence, each society trains and organizes its citizens to develop and maximize its resources for the satisfaction of all citizens.[5] The style of organization for efficiency is agreed upon, and handed over to some people, as leaders, to coordinate.[6] Progressive leaders continually evaluate and upgrade the roles and abilities of their citizens to meet the productive challenges of every new era.

Some societies, however, were not formed by agreement for common good, but by domination, denial and suppression.[7] Such societies are held down by military, legal and mental suppression of the lower class of the society.[8] The upper-class fabricate laws to combine and possess the people’s lands and resources, major factors of production.[9][10][11] By possessing access to lands and resources, they employ few of the people with high scientific skills for production. They also control the production output by reducing the number of workers, also using machines, for cheap and surplus labour, scarcity of products and, thus, higher prices.[12]

Thus, a boil on a king’s leg is a cause of employment for many, while boils on a thousand poor people’s bodies mean nothing. It is not a problem of insufficiency of space, or inability for people to study, but a problem of social organization and priority. If the priority of a society is common good, it trains and organizes her citizens for productivity and general sustenance. However, when a society is hijacked by a gang-rule,[14] masquerading as leaders, people are denied of education and access to resources for productivity.

Saying that machines create unemployment might be a result of misunderstanding the effects of social structures. It will be improper to say that machines create unemployment when two automated street sweepers are imported to sweep a whole city. Two automated street sweepers may sweep fifteen roads a day, but not the whole streets in Kano city. Machines will not do all the work, BECAUSE IT IS LEFT FOR HUMANS TO PRODUCE, DIRECT, TRANSPORT, MAINTAIN AND UTILIZE THESE MACHINES for common good. The process of producing a single model of automated-street-sweeper before mass-producing, creates more meaningful jobs for Kano citizens, than street-sweeping.

So, a profound question to ask is not whether machines create unemployment in Kano, but who produced the machines in Kano? Can Kano citizens be trained to start producing those automated street sweepers instead of waiting on manual or imported machine labour?

Simply, the social structure is twisted away from collaboration for common good, and to limiting the number of people who are eligible for preferential treatment. The need for social education, development and organization has not finished in the society. Instead, the development has been limited to particular areas of concentration and influence of the high-class citizens. Machines are, thus, made to replace human labour without upgrading the people to producers of machines, so as to limit the number of people eligible for concern.

Many jobs will phase out as humans continue to discover and utilize intelligent machines, but the purpose of those jobs, common good, will never phase out. And until the least person in life receives the best education and service available to humanity, there is job and purpose for everybody. Unemployment is an artificial creation of social segregation. It is a product of political insincerity to its first purpose of social development, for citizens to meet the challenges of the newest times; not just the sustenance of an unjust social structure.

Insisting that machines create unemployment in Nigeria will therefore be a fallacy of attributing the effect of social organizers to inanimate objects. It could qualify for a fallacy in logic, known as, the fallacy of false cause. Machines do not create unemployment, humans do. When job is defined as service to people who are schemed by a social system to be able to pay for it, then there is unemployment. But when job is the provision of necessary NEEDS in the society, then there may not be anything like unemployment. For each person has a role to contribute in the human society.

Tags:machines create unemployment
previous article
people of God filled in the city of Devil
next article
Time to close engineering departments in Nigeria