Our mumu don really do? 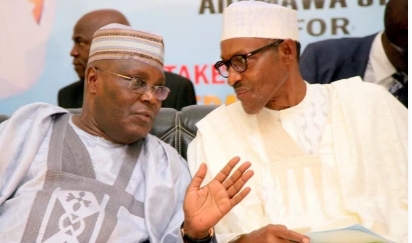 Our mumu don really do?

After the Nnamdi Kanu issue and restructure talk talk, it quickly dawned on us that we needed to start preparing for 2019. Many of our opinionists plunged in head first, and once again robust conversations on Nigerian politics rolled on. One thing stands out for the ongoing 2019 conversation, which is the need for Nigerians to look beyond Buhari and Atiku. It is now cliché to say that the establishment has failed Nigeria, and by that I mean PDP and APC are all same people, many of whom are working for their personal interests and not for the common good of ordinary Nigerians.

From my observation, there are three versions of 2019 conversation that worth considering.

The first group is the political optimism. The political optimists championed by the likes of Oby Ezekwesili who recently began “red card movement”, Charlie Boy “our mumu don do” movement and Fela Durotoye who recently inspired us with the “money will fail in 2019” talk. These optimists believe that Nigerians are tired of the establishment and come 2019, the establishment must all be kicked out, paving way for more visionary leaders across the tiers of government.

Some people have misconstrued the stance of this category as an attack on the present administration. They argue that once APC is unseated, PDP will have easy access to political power, which will be catastrophic given the success made on the campaign against corruption by the APC-run government. Theoretically, this concern of the pro-Buhari movement, which fears a return of power to PDP, can be easily dismissed since optimists clearly look beyond both mega parties. It is not about APC and PDP, it is about handing political power to seasoned leaders that can really deliver democracy’s dividends. Having said that, practically, the concern is legitimate and it fuels that position of pessimists.

Political pessimists in Nigeria believe that no matter how you intellectualize politics, we are doomed in the hands of the establishment. The people in government, their supporters and sponsors have enormous influence, which we must not underestimate. Recently, a researcher into political matters in Nigeria, Adegboyega Adeniran, noted that the greatest challenge of any political office aspirant is breaking the ranks all the political middle men to have direct access to the electorate. To communicate your manifesto to the common man, the electorate, you currently need to“settle”political jobbers, god fathers, and people of influence in a community’s political life. Failure to do so, your campaign will only be a good business opportunity for campaign poster printers and your campaign team.

Grass root politics is the key to winning election anywhere. It worked for Obama, and it has worked for George Weah. However, in Nigeria, you can hardly get to the root of the grass before the middle men will get upset and send thugs to intimidate you at the least or eliminate you at the most.

Since we can hardly do grass root politics without all that goes with it, we are doomed in the hands of either APC or PDP; pessimists opine. How can you beat them? They have the money, the connections, and the squad to intimidate or eliminate if need be. For them, it is power by any means possible. Charlie boy has referred to this group as “mumu” because they look on as their future is raped and pillaged by irresponsible “leaders” or rulers (to use a more accurate term) whom they have aided to get power and can never question or demand accountability.

The other interesting thing is that the opinion stream of pessimists very wide as it encompasses those who don’t care about politics, have no voters card, sell their votes and those who campaign and vote for corrupt leaders. The pessimists call to mind the famous quote of Niccolo Machiavelli, “since love and fear can hardly exist together, if we must choose between them, it is far safer to be feared than loved”. This, for me, is the operational doctrine of both despots and bad leaders, which pessimists naively adhere to.

The third group is middle ground between the two aforementioned. Realists insist that you cannot get angels to help Nigerians out of the current mess. We must all be in it to win or lose it (both good and bad people). While it is important to get vibrant, visionary leaders that will genuinely deliver the dividends of democracy, it is important to realize the enormity of unseating an establishment.

EFCC lead prosecutor, Festos Keyamo and Senator Ben Murray Bruce are among the loudest proponents of this third way. Keyamo recalls that the emergence of APC was a multifaceted drive by politicians, civic groups and concerned individuals to stop the wanton abuse of political power by PDP. To do this, there was need for everyone to come together and work with “repentant politicians” and “saintly political new bees” to change the status quo. Moving forward in 2019, this has to be the attitude.

Keyamo flayed both optimists and pessimists by arguing that when Nigerians see any new face in politics, most people laugh, mock and sometimes attack the person. This is not far from the truth. We recall that great criticism greeted Ezekwesili’s launch of the “red card campaign”, same rejection and mockery was unleashed on Pastor Tunde Bakare, who recently declared his intention to run for presidency, and I thought no one can fault Durotaye until I read what Nigerians had to say about him on social media. Durotaye was declared dead on arrival, to say the least. It is fair thus to ask “Our mumu don really do?”

On the one hand, we are complaining of the daily excruciating hardship suffered by common Nigerians, while we have great human capital that can help us fulfil our potential as a nation. On the other hand, we are quick to castigate and push away any new face in politics. It seems we have become comfortable with the idea that come 2019, it is either the usual faces of no one person.

Do we really know what we want? Plato’s famous quote in the Republic is worthy of mention here, “until philosophers rule as kings or those who are now called kings and leading men genuinely and adequately philosophize, that is, until political power and philosophy entirely coincide, while the many natures who at present either pursue one exclusively are forcibly prevented from doing so, cities will have no rest from evils…nor, I think, will the human race.”

I agree that there are lots of evil people in politics, but there are few good people as well. Old and new must work together and slowly the Nigerian political space can be purged of all crude and unfashionable ideologies that currently underpin our national and local politics. It may mean that a group of young, visionary leaders will have to work with middle men and established politicians without compromising the loyalty they have to their values and love for common good.

How that can work out practically is yet to be seen but we must all try, I believe. We cannot underestimate the magnitude of the “mumu-ness” of many Nigerians, but we may require the third way to give everyone greater hope that like Obama “yes we can” and like Bishop Kukah “yes we must” work together to make 2019 a turning point towards greater good for all at every level in the Nigerian society.

Tags:BuhariNigeriaNigerian politiciansOur mumu don do
previous article
The more local we go, the more international we become
next article
Breathing on nature and the economic resurrection of Nigeria