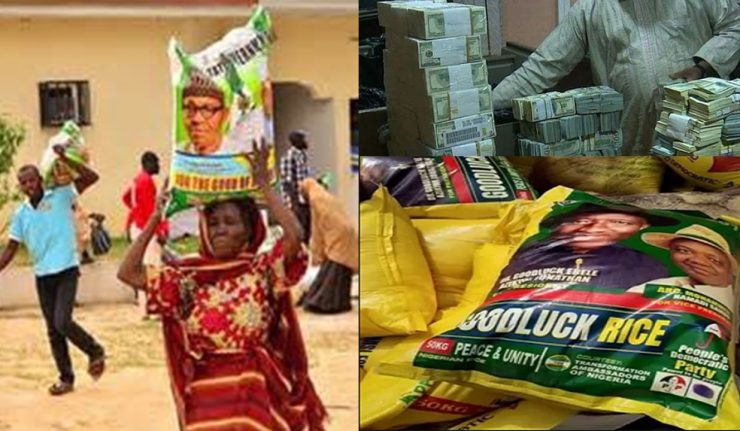 A flamboyantly dressed lady came among other candidates to be interviewed for a competitive position in a private company. During her private session with the company-owner, the company owner was carried away by her splendour that he lay with her. After being employed, the lady secretly obtained the CCTV feed of the event as insurance, in case the company-owner thinks of sacking her for future misconduct. Was he ready for court cases of harassment, rape, exploitation and negative publicity? You took her not because she was qualified or competent, but because you were carried away by her flamboyance. Just as the company owner’s sexual appetite denies him of good service, monetization of Nigerian politics denies Nigerians of good governance. In the absence of national focus, it appears that many Nigerians seem eager to sell their votes for little gifts.

One of the conditions for election into some Nigerian public offices is that the candidate should not have been declared bankrupt.[1] Apart from the official condition, the expenses of Nigerian campaigns make it difficult for candidates to focus on governance. Yet, some political analysts and advocates of monetization of Nigerian politics opine that wealthy people are less disposed to corruption, since they were wealthy before going into politics and no longer need money. These analysts indirectly advocate for more monetization of Nigerian politics by including wealth as a qualification for good leadership.

After the death of the wicked King Geoffrey, his grandpa, Tywin Lannister, spoke to the would-be King Tommen about wisdom as the best quality for leadership. King Solomon prayed for wisdom as the most important quality for leading his people. Wisdom has thus, been identified as the most important leadership quality in most kingdoms and communities throughout history. “To be wise is to know the deepest causes in that department of knowledge and conduct in which one is said to be wise.”[2] Hence, wisdom in societal leadership would be the knowledge of the deepest causes in human relationship within the society. Knowing the deepest causes in human relationship begins with knowing human as individual before their relationship with others and environmental resources.

Human being is a man, woman, or child of the species Homo sapiens, distinguished from other animals by superior mental development, power of articulate speech, and upright stance.[3] He is a rational and social animal who continually seek happiness[4] in the human society. Humans have facticity (unchangeable pasts/facts) and possibilities (creativity),[5] which they develop and utilize in seeking happiness. Hence, they relate with others to develop their potentials for creativity, gainful utility (trade) and happiness in the society. In this social relationship, they choose a leader(s) who directs the modes of collaboration within the society for harmonious creativity and progress.

It may be better for people with wealthy backgrounds to become leaders in Nigeria because:

On the contrary, wealth does not guarantee wisdom, otherwise there will not be rich fools and rich criminals.

Neither wealth nor poverty guarantees the presence or absence of wisdom for good leadership, as there are rich and poor fools and sages. Wisdom for leadership is often demonstrated by candidate’s ability to negotiate and convincingly communicate his/her visions, methods and willpower. Without wisdom, leadership becomes a way out of poverty for the poor, or entitled position for the wealthy’s business expansion. Lee Kwan Yew noted that “a precondition for an honest government is that candidates must not need large sums of money to get elected, or it must trigger off the cycle of corruption. The bane of most countries in Asia has been the high cost of elections.”[6] In his case, “there was no need for the party to replenish its coffers after elections, and between elections there were no gifts for voters.”[7]

Thus, societies who wish to grow focus on wisdom, instead of wealth-status of the candidates.

[1] Constitution of the Federal Republic of Nigeria, 2011 as amended, Section 137, subsection 1, paragraphs vi

Tags:Monetization of Nigerian politics
previous article
The politics of terrorism: gradation of ignorance between instigator and perpetrator
next article
Nigeria and the Paradox of Lies