Revoking the licence to beg in Nigeria 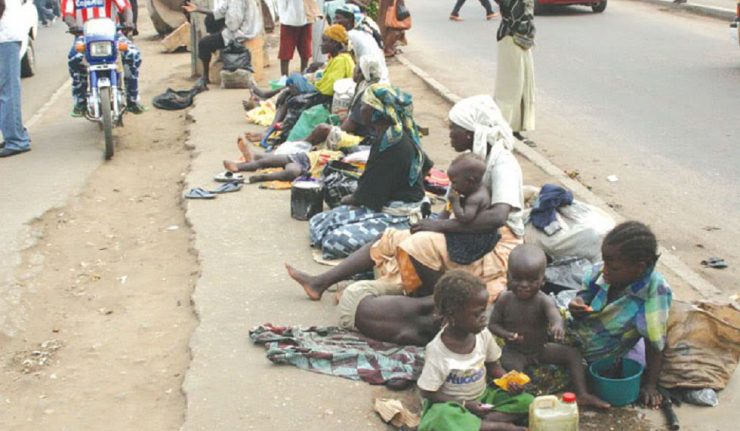 After receiving money from a lady who pitied him and his story of being a sick and hungry orphan, Ali (13years) returned to his companion in jubilation: “oh boy, you see as I take trick this woman with my innocent face, she come give me 1k”. Ali’s begging companion praised him: “you are very smart, tomorrow we go develop another story-format to beg more money.” Without evaluating the elements of pride and productivity in the original cultures of Nigeria’s ethnic communities, Nigeria may never rise from the beggars’ syndrome. Hence, every frustrated or lazy person flaunts the country’s economic situation and any other real or fictitious misfortunes as a licence to beg in Nigeria.

Unfortunately, Nigeria was not formed to enable the development of the citizens’ capacity to produce and contribute to the society.[2] Instead, Nigeria was arbitrarily created by colonialists for access to mineral resources in exchange for money and finished goods.[3] Colonialists yoked hundreds of ethnic groups and kingdoms together, without their negotiation or consent,[4] under a militarized government. Hence, the militarised Nigerian government restricts ethnic communities from accessing mineral resources[5][6][7] for production, while begging foreigners to buy them.[8] Now, licence to beg in Nigeria begins from the government who begs foreigners to buy crude resources, to bring aides and Foreign Direct Investments.[9]

Since the main source of Nigeria’s income has been the sale of crude resources at internationally fixed prices, Nigerian income is externally controlled. And the Nigerian government complains about price of oil, instead of enabling Nigerians to use their resources for production. In the absence of real local production, almost every Nigerian becomes a beggar for some foreign products or idea. And your licence to beg in Nigeria is facilitated by your rank or connection to someone in rank. Federal government begs from the West and Asia, states beg from federal, local governments beg from state and so on. Even the ethnic communities who own the confiscated crude resources now beg for allocations from federal government.

Today, begging has permeated almost all sections of the country, both the outright lowly begging and a corporately packaged begging. Once you fly into Nigeria, the coded begging begins at the airports from the security officials, attendants and doormen etc. – “Oga welcome, anything for the boys?” In schools, banks, churches, offices, hospitals, social-media, restaurants, clubhouse, markets, streets, government-house, you find both lowly and corporate beggars. Job applicants create profiles, and several groups create loud mission statements as licence to beg for public/government support. In each section, people find licence to beg in Nigeria by flattering, displaying misfortune, deception or emotional and spiritual blackmails. This licence to beg mentality of “give-me-something-for-nothing” is sustained by the absence of opportunity to produce necessities from local resources.

Apart from the local unproductivity, the wealth distribution pattern contributes to the search for licence to beg in Nigeria. The federally amassed funds from sale of different communities’ crude resources are distributed among government officials and parastatals for salaries and renovations. Since there is little or no local production, the funds are tapped by foreign producers in exchange for finished goods. Hence, the resource-foreign-exchange is distributed from government to ministries and parastatals, and back to foreign manufacturers through banks and importers. The government service sector constitutes only little percentage of Nigeria’s population. The remaining majority who struggle unsuccessfully to join either governments, importers or banks take poverty, misfortune or unemployment as their own licence to beg in Nigeria.

Reacting to the scourge of begging, some governors prohibit begging,[10] while natives beat beggars with fake injuries and stories.[11] Fighting against licence to beg in Nigeria, a Nigerian governor deported people he tagged as beggars and nuisance. Prohibiting begging may not be possible without addressing the root cause of poverty and loss of value in Nigeria. Lord Macaulay’s ‘alleged’ address to British parliament on 2nd February, 1835, about India has been severally recapped about Africa.

“I have travelled across the length and breadth of India, and I have not seen one person who is a beggar, who is a thief; such wealth I have seen in this country, such moral values, people of such calibre, that I do not think we would ever conquer this country, unless we break the very backbone of this nation which is her spiritual and cultural heritage, and therefore I propose that we replace her old and ancient education system, her culture, for if the Indians think that all that is foreign is good and greater than their own, they will lose their self-esteem, their native culture, and they will become what we want them, a truly dominated people.”[12]

Whether true or false, this address represents an angle from which many Africans view their historical relationship with the West. The feeling is sustained with the observation of exploitative relationship between developing nations and former colonialists.[13] The militarised governments they imposed on African ethnic communities and kingdoms exploit ethnic communities’ mineral resources for the West. In return, the West brings coloured-paper-tickets for consumerist finished goods and depreciating assets flaunted as payment, aides and loans for Africa. “When one hand gives under the flashing light of cameras, the other takes (African mineral resources) in the shadows”[14]

Before colonialism, Nigerian ethnic communities had organized themselves to contribute their talents in the security, productivity and administration of their communities.[15] The ethnic communities were communitarian, producing and distributing what they needed for sustenance from their local resources. Though they did not have the high technology of the present day science, they were ready to learn.[16] Each community catered for their natives through family occupations and socially managed resources, without begging. It was considered a family and communal disgrace that one of their natives was seen begging or roaming mad. But since the economic right to their resources has been confiscated, many communities are no longer able to cater for their natives.

The poor situation for needing a licence to beg in Nigeria may be tolerable for some reasons:

On the contrary, people do not have to be made poor so that other can manifest their goodness or learn the virtue of productivity.

Resolving the begging scourge begins from the thought-patterns of the ethnic communities that constitute Nigeria.[17] The present disposition in Nigeria is to gather enough money for yourself and your family, and get praised for displaying charity. If the country continues along this capitalist individualism introduced by colonialist, there may never be a headway. Hence, Nigeria and the ethnic communities have great tasks in revoking the licence to beg in Nigeria.

Every Nigerian belongs to an ethnic community, and deserves a foundation for productivity and livelihood. Every Nigerian deserves to have something actual or potential to give for what he needs: healthcare, feeding, housing, leisure or education.

When there is a moderate distribution of resources in Nigeria, even people with disabilities will not see their disabilities as a licence to beg. Instead, they will find a way of expressing their productivity and earn their pride and living in the society.

Tags:Licence to beg in Nigeria
previous article
Police reform: role of police in a new Nigeria
next article
Does Nigeria need iron-handed leaders to be revived?