How do effective leaders use physical strength and force in administration? 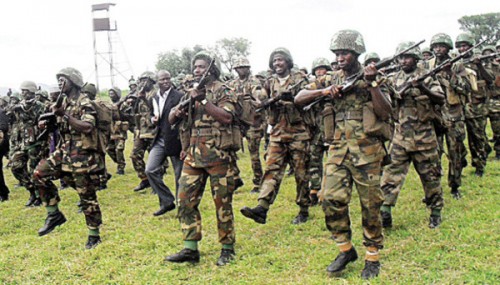 After Theon Greyjoy invaded Winterfell, he was cajoled to show his physical strength and force by publicly executing Winterfell’s swordsman, Sir Rodrick. Theon’s lieutenant enticed him to obtain respect by showing power: “He has to pay the iron-price; they will never respect you while he lives.”[1] In another instance, the temptation to show physical strength and force was overcome by President David Palmer, who refused to retaliate unless he got true justification.[2] Some greedy oil-marketers framed three innocent oil-rich countries in bombing Palmer’s country, and hoped to gain market-shares from his retaliation on the countries. How do effective leaders apply strength and force in proper administration of their territories or groups?

Love and fear are two necessary feelings that leaders need for obtaining and sustaining cooperation among their people. Though it appears better, obtaining the degree of love required for cooperation may be more difficult than obtaining fear. Fear comes from experiencing instant pain, deprivation, death or threats, but love takes longer time and sacrifices to cultivate or sustain. Fear has been a tool for controlling people and obtaining collaboration, even where there is no love. Hence, some political analysts advocate early demonstration of physical strength and force to instil fear and to obtain collaboration from subjects.

The purpose of leadership is to direct the modes of collaboration in a society for harmonious cohabitation, creativity and progress. Leaders are empowered by the society to exercise some degree of control on members of the society for common good. Hence, legitimate leadership-positions are created by a group of people who wish to organise themselves for peace and progress. They begin by agreeing on terms and conditions for their relationship that will foster peace and progress. Eventually, they choose and empower leader(s) from among themselves to become custodian(s) of their agreement.

It may be tempting for leaders to demonstrate their readiness to use physical strength and force for organizing the society. Showing readiness for physical strength and force may instil the necessary amount of fear for obtaining collaboration and discouraging insubordination. It is often expected to send signal of seriousness about leaders, especially new leaders that are still being observed. Yet, without proper and factual justification for using physical strength and force according to the people’s agreement, leadership becomes tyranny. The quick and unjustified use of force does not show a leader’s strength, but his lack of self-control and emotional intelligence.

In Nigeria, there is not yet an agreement between the different ethnic communities that are yoked together in Nigeria.[3] “Africa’s nation states were formed by foreigners, lines drawn by Europeans on maps of places they had often never been to. They carved out territories, cut up kingdoms and societies of which they had little idea“[4] And there has not been a sincere effort to obtain an agreement that will guide the relationship between Nigerians towards progress. Instead, using physical strength and force, different politicians have held Nigeria together at military-gunpoint under a colonially-imposed constitution

Despite the challenges facing the disorganized Nigeria, a new generation of leaders will arise to foster sincere agreements between Nigerians. These agreements will be at the foundation of future progress that will take place in Nigeria. Then, physical strength and force will find justification and purpose in the pursuit of justice in line with the consent of the governed. Those who only obtain obedience by slaughtering, terrorizing and threatening people are strong animals, not strong humans or leaders. Since humans are rational animals, strong leaders are those who obtain collaboration through rational conviction for common good. They only need physical strength and force to create safe atmospheres for ‘uncoerced’ dialogue and collaboration.

A leader that quickly resorts to physical strength and force before reason and dialogue becomes the least rational of citizens.