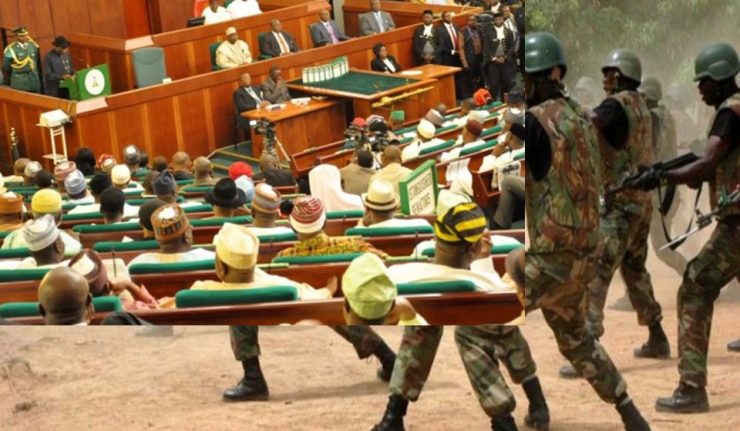 Different countries have football bodies that organize matches and other collaborative activities between teams in their country. The different football teams are owned, managed and directed by individuals or groups, who set up or acquire them. All these teams register with their national football governing body, who sets them up with other teams (local/international) for matches. Though the governing body formulates rules to regulate the relationship between the teams, the teams own and manage their clubs independently for progress. Just like football governing bodies, civil government regulate ethnic communities who rightfully own and manage their resources for their good.

Civil government consists of the political offices that replaced the positions of former colonial masters in Nigeria and other African countries. These include the offices of heads-of-state, governors, senators, federal and state representatives, councillors and other arbitrary positions deriving therefrom. In Nigeria, like in other African countries, these offices were brutally superimposed on dissimilar pre-colonial ethnic communities and leadership from annexation till independence.[1] Consequently, there are cries of deprivation, marginalization, corruption, brutality and underdevelopment in the reign of civil government in Nigeria.

Human beings are active and productive beings, who are born as members of specific communities where they belong by origin. From these communities, they obtain emotional, mental and physical resources for their development and self-actualization.[2] However, these communities cannot provide everything they need, so they produce and trade their surpluses with other communities who have what they need. Eventually, the several trading communities harmonize their relationship and mode of interaction through envoys for steady alliances.[3] Many of the intercommunal alliances for human development, productivity, trade and security are currently organized as heterogeneous countries. The terms and conditions of the intercommunal alliances are harmonized and enforced by governing bodies instituted and empowered by the people.[4]

Hence, the civil government’s role is to facilitate, regulate and harmonize productive initiatives of the different peoples and communities in a country. Like brain regulating body parts, or traffic warders regulating drivers’ interactions, civil government harmonizes the traffic of initiatives and productivity in a society. Though cars belong to drivers, traffic-regulating bodies exercise control over drivers and their cars for road-safety and harmony. They tax, license and penalize the drivers and their cars, check road-worthiness and other necessary conditions in both the cars and their drivers. The traffic warders’ control of people’s cars does not give them (traffic warders) ownership of the cars. The brain does not take over the power and function of all other body-parts because it coordinates their activities. FIFA does not become the owner of Chelsea FC because it organizes world football, and civil government do not legitimately own ethnic communities’ lands and resources because they facilitate and harmonize their relationship for productivity, peace and progress.

Unfortunately, Nigerian civil government followed the colonial scheme by arbitrarily confiscating and auctioning the peoples’ lands and mineral resources. British colonialists created Nigeria by brutally yoking hundreds of unconsented kingdoms and communities[5] together under a militarized government and constitution.[6] “Africa’s nation states were formed by foreigners, lines drawn by Europeans on maps of places they had often never been to. They carved out territories, cut up kingdoms and societies of which they had little idea.“[7] “Nigerians have never agreed – or been given the chance to agree – what Nigeria is.”[8] Presently, different politicians struggle to occupy the exploitative offices created by the colonialists, or deriving from them.

Though most of the Nigerians who eventually occupy the political offices have good intentions, they get confused and frustrated in trying to implement democratic roles on an imposed constitution. In their frustration, they consult the colonial makers of the constitution or other ‘authorities’ for direction.[9] These consultations breed even worse policies to strengthen the colonial exploitative scheme in Nigeria. Some of the exploitative policies and decrees emanating from the imposed government include the Land Use Act, and the Nigerian Mineral and Mining Act. The Land Use Act was used

“to vest all land comprised in the territory of each state solely in the Governor of the State, who would be responsible for allocation of land in all urban areas to individuals resident in the state and to organizations for residential, agricultural, commercial and other purposes”[10]

By virtue of this Act, several governors usurp people’s lands for themselves or their cronies, sometimes at military gunpoint.

The ‘Nigerian Mineral and Mining Act’, which sustains unproductivity and poverty in Nigeria, states that:

“… all lands in which minerals have been found in Nigeria and any area covered by its territorial waters or constituency and the Exclusive Economic Zone shall, from the commencement of this Act be acquired by the Government of the Federation…”[11] “No person shall search for or exploit mineral resources in Nigeria or divert or impound any water for the purpose of mining except as provided in this Act.”[12] “The property in mineral resources shall pass from the Government to the person by whom the mineral resources are lawfully won, upon their recovery in accordance with this Act.”[13]

Using this Act, the federal government seizes and auctions ethnic communities’ mineral resources to foreign companies, while Nigerian engineers stay unemployed. Using funds from mineral resources, the federal government fruitlessly hopes to buy a developed Nigeria from the West or Asia, even on huge generational debts. Eventually, the imposed government creates several states, local governments, districts, constituencies, wards and other positions to justify the confiscation of people’s lands and resources. They set arbitrarily-high payment schemes for their positions,[14][15] even after retirement,[16][17] while the owners of the resources starve to death.

Some of the necessary issues for deliberation towards having a civil and productive federating alliance may include:

Ethnic communities are like employers, who employ civil government to manage some part of their business. It is the right and prerogative of the employer to determine the job description for his workers, and not the worker’s right to force what they want on their employer. If the workers are not satisfied with the job description, they either ask for a redress, or quit the job. Also, it is the right of the ethnic communities to determine the relevant offices and job descriptions (constitutional functions) of the civil government.

In conclusion, the whole can only be as strong as the parts and the link between them. If Nigeria is to be called independent, then the different peoples of Nigeria should agree to their form of government. Otherwise, Nigeria remains an outstation of the colonial masters, by virtue of the imposed form of government. The role of civil government is not to micromanage the ethnic communities lands and resources, but to facilitate and regulate their productivity. Then the pressure on the central government will reduce.

Public ‘servants’ cannot claim to be serving a people who have not said or agreed on what they want in the form of a constitution.

[14] Shehu Sani, “Why I revealed how much we earn as senators” In PremiumTimes, by Kemi Busari, 16th March, 2018.  https://www.premiumtimesng.com/news/top-news/261561-why-i-revealed-how-much-we-earn-as-senators-shehu-sani.html