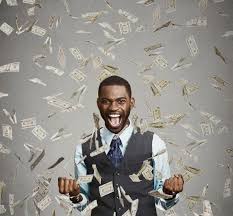 Within the past seven years, Nigerian sports lovers’ addiction to specific football clubs reduced slightly due to sports betting. After predicting and betting on particular club’s victory, sports lovers support the club they bet on instead of clubs they fancied. They now think more pragmatic about getting rewards for supporting clubs, instead of shouting up and down without impact. Many Nigerians make huge expenses by boastfully patronizing company-brands of food, drinks, wears, furniture and luxury without getting anything in return. It may be better to receive constant dividends on your expenses by owning shares in Nigerian brands you patronize.

Humans seek to secure their lives by accumulating and storing wealth. Yet, after accumulating wealth, they give it out to other people as payment for their daily needs. However, if they own part of the farms or industries that produce what they exchange and consume, they won’t always have to give out their wealth to other people. Instead, by spending on what their factories produce, the wealth they expend goes back into their own pockets. Prosperous societies are not only known for producing what they sell, but also consuming what they produce.

Arkad, the richest man in Babylon, insists that “a man’s wealth is not in the coins he carries in his purse – or spends even prudently. It is in the income he buildeth, the golden stream that continually floweth into his purse.”[1] This enriching golden stream flows both from the man’s investments[2] and his owned dwelling[3] – daily expenses. For “no man’s family can fully enjoy life unless they do have a plot of ground… where the wife may raise not only blossoms but good rich herbs to feed her family.”[4]

The organic and technological commodities for which Nigerians spend most of their daily, weekly, monthly and yearly income include drinks, medical supplies, cosmetics, food, fuel, generators, vehicles, furniture, computers, phones, bandwidth, building materials, wears and other luxuries. And there are about 170 million Nigerians who expend their wealth daily to the producers of these commodities. Unfortunately, almost all the producers of these commodities are foreigners within or outside Nigeria. Few Nigerian entrepreneurs are able to import and distribute these commodities with some profits, while the main wealth goes to the foreign producers. Thus, Nigerians’ wealth continually flows into foreign producers’ purses, while majority of Nigerians remain poor and unemployed.

Some reasons for the lack of local producers to gain from the wealth in Nigerians’ daily expenses include:

SOCIAL DISORGANIZATION: progressive societies are formed from the agreement of the people to collaborate in utilizing their resources for producing what they need. However, Nigeria was formed by a forceful amalgamation of unconsented ethnic groups and communities under a militarized federal government. Hence, instead of collaborating to produce what they buy, consume and sell, the federal government seizes and auctions the mineral resources for production. Without access to resources for research and production, intelligent and hard-working Nigerians are unable to produce much.

FOREIGN COMPETITION: the foreign companies benefiting from the wealth in Nigerians’ expenses have advanced more than Nigerian would-be producers. Yet, they are still threatened by the thought of an emergence of local producers to displace them. Hence, there seem to be a series of de-marketing for Nigerian invention and production efforts.

NON-SUPPORT FOR LOCAL RESEARCH AND PRODUCTION: the disordering of the ethnic communities removed the ethnic communities’ capacities to fund researches on their mineral resources towards production.[5][6][7] The federal government itself is more interested in obtaining and sharing funds from mineral resources than funding research and production.[8] In the absence of support for local research and production, many potential producers are discouraged, while others join importation. Eventually, Nigerians of same or different ethnic origins abandon the unsupported and ‘inferior’ production efforts of Nigeria’s potential producers. Thus, the more Nigerians spend, the more foreign producers get rich.

Possible solutions to these continuous leakage so that Nigerians will earn the expenses of Nigerians’ wealth include:

If Nigerians do not begin to majorly patronize products of which they are shareholders, their wealth will continue to leak into foreign pockets. But like sports-betting, when they hope to earn dividends from spending on their products, they patronize it more and encourage others.

That, upon which you consistently spend your time and wealth will continue to grow, whether it is yours or others’. It better be yours.

Tags:earning back your expenses
previous article
Cultural blackmail of the African traditional institutions in the name of modernization
next article
Overcoming the fear of teaching and learning history in Nigeria for a better society