Can persons from former secessionist regions be trusted to rescue Nigeria? 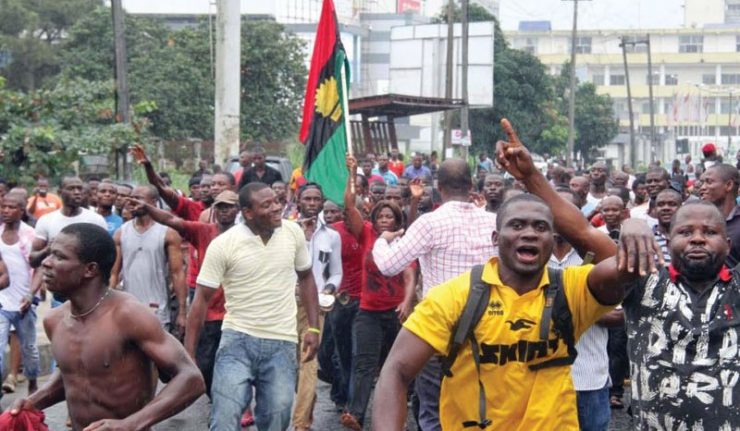 A man found himself in a derailed train that was dangerously tunnelling through dark bushes to an unknown destination. He tried to disconnect the coach containing him and his numerous family members, but was restrained by train officials. He saw weak rappel-ropes extending from helicopters flying above the train, but they cannot carry more than two people. He can either improvingly take over the wheels from the escape-kitted officials or climb away without his family. People of former secessionist regions who are unhappy with Nigeria may seek political office to reorganize Nigeria, endure in silence or run to exile.

Several sections of the Nigerian society have at different times opted to secede from Nigeria for its lack of focus. These attempts were diplomatically[1] or brutally[2] hindered through the same colonialists who forged Nigeria by brutally joining several unconsented kingdoms and communities. Since then the relationship between the different peoples has remained hostile as they struggle for control of the forcefully-combined mineral-resource funds. Hence, some Nigerians bitterly oppose persons from former secessionist regions that could disrupt the existing arrangement from which they benefit financially, politically or emotionally. These people from former secessionist regions are, thus, antagonized for attempting to secede, or pushing for distinction in resource control/ownership.

Some of the reasons proffered for distrusting persons from former secessionist regions include:

Progressive societies are guided by the peoples’ agreement to collaborate in utilizing their human and mineral resources for common good. Thus, the main purpose for modern and progressive societies is to collaborate, develop and utilize their resources for common good. This type of collaboration is built on the informed consent of the people who will collaborate in the social arrangement. In the absence of such consented social arrangement, people either suffer, opt-out or build the desired arrangement.

Different Nigerians desire peace, collaboration and progress, whether in a united Nigeria or their separate regions. The desired peace, collaboration and progress may never come from the unconsented union based on confiscating peoples’ resources. Instead, the desired union will manifest when constituent communities distinguish themselves – human/environmental potentials – before agreeing on modes of collaboration. When Nigerian ethnic communities agree and begin to collaborate productively, former secessionist regions will not want to leave again.

Below menu bar of Restartnaija.com

[1] The north attempted to secede in 1966 after the first military coup. https://en.wikipedia.org/wiki/Nigerian_Civil_War. Retrieved 12th April, 2018.

Tags:former secessionist regions
previous article
Standing on unverified existing protocols: time to redefine our reality
next article
The docility that kills a nation