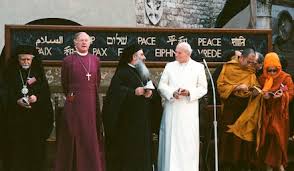 In the Tower of Babel narrative, humans planned to build a tower reaching the sky, home of the gods. They were able to plan and begin the project because they spoke one language and understood one another. When the gods became afraid of the mighty capacity of human collaboration, they brought confusion into humans’ language leading to misunderstanding and discontinuation of the project.[1] Hence, when a person wishes to discourage collaboration and productive breakthrough among others, he highlights social/religious/economic or other divisions.  Nigeria’s highly-divided society can achieve collaborative productivity by reducing divisions and linking Nigerian societies/religions for a new Nigeria.

Cersei Lannister insisted that “the faith and the crown are the two pillars that hold the world, one collapses the other follows.”[2] Despite the physicality of man’s nature, man has a spiritual aspect that makes him seek to transcend his physical nature. Man always finds himself unfulfilled, never satisfied on the throne of conquered material success,[3] therefore he seeks a supernatural happiness.[4] “All specifically human action is thick with spirituality: there is always something that evades the sphere of matter in knowledge, will, speech, culture, technique, etc.”[5] Hence, while securing the material resources for physical happiness, man seeks the spiritual purpose that fulfils his supernatural desire for meaningful life.

Religion is defined as the belief in the existence of a god or gods, and the activities that are concerned with the worship of them.[6] Attempts to explain human origin beyond postulations of coincidence points to an intelligent force of creation, which is beyond nature.[7] Also, the presence of order, beauty, purposeful-motion and harmony in nature cannot rise from coincidence, but from an intelligent creator.[8] This realization necessitated the belief in a supernatural being that is responsible for creating the world and humans. Through religious activities, humans seek direction from the creator in dealing with creatures towards the actualization of their lives’ purposes.

Though the desire for God resides in all humans, different societies shape and practice their different religions according to their specific experiences. People’s interactions with their environments – works, politics, neighbours, wars and climate – influence how they organize their different religions. Thus, humans organize their religions, or adopt other people’s religions for achieving spiritual happiness, despite their material wellbeing. This is why there are different religions in the world with different practices and doctrines, directed to the same God. Yet, their aim remains to obtain proper directions for achieving spiritual happiness, even through their interaction with their environment. Hence, religions and religious doctrines shape people’s personal and social lives with pious values and consciousness of the divine and ultimate happiness.

The journey to ultimate happiness continues along the path of enlightenment through religious, social and academic discoveries and revelations. These institutions collaborate to provide direction for social behaviours and practices for peace and progress. Religion obtains information from revelations; academia obtains from observation and research, and government harmonizes the directives for common good. Hence, the criteria for religious recommendations or academic proposals is their contribution to common good – justice, peace and productivity. While religious doctrines aim at spiritual happiness, academic and political edicts aim at the intellectual and physical wellbeing.

Before the Nomad-Arabic and colonialist-European invasion of Nigeria, the different Kingdoms and communities had their various Traditional religions. In 1804, Uthman Dan Fodio (Fulani) introduced Islam in Northern Nigeria after conquering the Northern cities,[9] while the Europeans introduced Christianity after annexing the southern communities and kingdoms.[10] Though the Europeans conquered all of Nigeria, they allowed Islam to continue in the North because of its centralizing structure. They also allowed African traditional religion to continue, as long as the people were loyal to their colonial agenda. Thus, the three religions were expected to contribute from their different doctrines to the colonial government’s agenda. Then, after the Nigerian independence, these religions were expected to contribute to common good in Nigeria through their teachings.

In order to fulfil their social role, these religions interpret their doctrines to emphasize ’virtue as man’s perfecting element’[11]. Though they are highly influential, it is difficult to synthesize the numerous Traditional Religions in Nigeria or their doctrines. Yet, like in other religions, there are virtuous and vicious members of African traditional religion in different parts of Nigeria. Despite the difficulty in summarizing their numerous doctrines for evaluation, African Traditional Religions have and can contribute to social virtues in Nigeria. CHRISTIANITY and ISLAM have similarities in their holy books bearing witness to the necessary virtues for progress and common good.

Despite having doctrines that support social virtues, Christianity and Islam contain passages that can be twisted for justifying social atrocities. Some of these passages have been exploited by different people in the history of both religions to justify inhuman acts. Through proper interpretation and contextualization, these passages can be protected against exploitation by people with misguided intentions and socio-political/economic agendas. Few of the twistable passages for justifying misguided intentions from both the Christian and Islamic holy books may include:

Islam: Al baqarah 198 – it is no crime in you if ye seek of the bounty of your Lord.

With these different elements in Holy Books, preachers are able to interpret passages that suit their spiritual or socio-political desires. Greedy, hateful and intolerant preachers know the passages to emphasize for their greedy and hateful agendas. Conversely, just and peaceful preachers know the passages to emphasize for their agendas for social justice, progress and common good. Hence, the effect of religious interpretations are directed according to the relativistic influence of the preacher. And without regulating bodies to evaluate the effects of doctrines and their preachers, they can be used for atrocities.

Until the 15th century, Christianity was only Catholic Church, and its doctrines were evaluate by the Magisterium – College of Bishops. The Magisterium was responsible for scrutinizing and directing the church doctrines and preachers to avoid misinterpretations and heresies. Eventually, some people began protesting and breaking out of the Catholic Church to form other Christian groups with varying doctrines. Today, there are many thousand denominations of Christian groups created from different doctrinal or managerial disagreements within and outside Nigeria. Thus, there is a multiplication of contradictory doctrines between the many Christian groups seeking members with targeted doctrines.

Prophet Muhammed (pbuh) instituted Islam in the 7th century at Mecca as a combination of political and religious ways of life.[12] He instituted five pillars of Islam as Shahada (Faith), Salah (prayer), Zakat (charity), Sawn (fasting) and Hajj (pilgrimage). Islamic rites and seasons are regulated in different political spheres by different national Supreme councils linking to Saudi Arabia. However, Islam may not have a clerical authority for interpreting holy books like the Catholic Church since every Muslim of good character has equal access to God. Also, recognized pious males in families and communities, who have undergone Arabic religious lessons can lead in prayers and interpret holy books.[13] Though it makes Islam more egalitarian and democratic, extremists may exploit the privilege to spread wrong teachings.

Despite having histories of violence and peace, Christianity and Islam can be freed from exploitable loopholes and renewed to promote social virtues. Each religion of God is originally a source of rapid material and moral progress for mankind. However over time, like all things, it will slowly begin to decline and eventually lose its original influence and beauty, and is then in need of renewal.[14]

Who benefits from the distraction of religious agreement?

Societies progress by collaborating to utilize their human and natural resources to produce what they need for sustenance and profit. However, when members of a society continuously clash on ethnicity and religion, they become unproductive, needing external products for sustenance. Also, in the heat of inter-ethnic and religious clashes, societies trade valuable resources for weapons and sustenance commodities. British industrialists formed Nigeria by brutally yoking several unconsented kingdoms of varying religions under a militarized federal government for obtaining mineral resources. It could thus, be inferred that colonialists enlarged the seed of conflict, and have been reaping cheap mineral resources.

Though Christianity, Islam and Traditional Religions can be misused for fuelling superstition and crisis, they can also be used for improving productive collaboration. They can shape social behaviours by emphasizing the fundamental social values of sincerity, modesty and generosity. The religious bodies can evaluate the interpretation and application of the doctrines disseminated as theirs in modern civilization of human rights and enlightenment. Thus, despite the need to respect people’s freedom of worship, responsible governments may assist different religions to evaluate the formation process of religious bodies and leaders for common good. Qualification for religious leadership may, thus, require social-philosophical training and psychological evaluation to avoid poisoning the society with dangerous doctrines and values. Also, religious leaders may have to take legal responsibility for the effect of their doctrines in the society. For freedom of worship does not imply a freedom to mislead people into conflicts and unproductivity.

“In truth, religion is a radiant light and an impregnable stronghold for the protection and welfare of the peoples of the world. For the fear of God impelleth man to hold fast to that which is good, and shun all evil. Should the lamp of religion be obscured, chaos and confusion will ensue, and the lights of fairness and justice, of tranquillity and peace cease to shine. Unto this will bear witness every man of true understanding.” – Baha’u’llah[15]
Below menu bar of Restartnaija.com

[12] Ashmede Asgarali, “Does Islam have a central authority?”, Masters from University of Manitoba (1978) https://www.quora.com/why-doesnt-Islam-have-a-central-authority