Racism and the spirit of sportsmanship 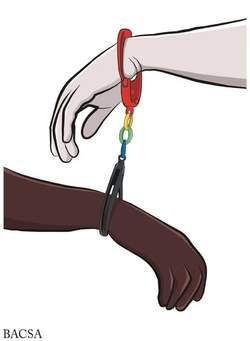 Though the left and right hands are parts of human body, some cultures attach preference to using one hand to another. Despite the rivalry between the two hands, they need each other to balance the body movement and perform other activities. Without amputation, the right hand cannot climb a mountain leaving the left hand tied to the ground beneath a cave. Trying to amputate or weaken one hand to favour the other leads to a fundamental deformation of the whole body. Racism with other attempts to dehumanize humans based on colour, gender or status causes a fundamental deformation in humans. Since we are all humans, you cannot dehumanize anybody without first dehumanizing and deforming yourself morally, rationally or physically.

Racism is defined as “the belief in the superiority of one race over another, which often results in discrimination and prejudice towards people based on their race or ethnicity.”[1][2] Racism manifests in discriminatory policies, physical and verbal abuses, and demeaning assumptions about people’s capacities and motives.[3] Some scholars seek to justify racism by using definitions of rationality to prove that racially-suppressed people are not really humans.[4] However, their attempts to prove the absence of rationality[5] in other people as justification for racism always end in contradiction.[6] If they are not rational and thus not humans, you cannot Christianize or dialogue with them, or steal their artworks.[7]

Living things – plants, lower animals and humans – possess instincts of self-preservation, which makes them struggle to survive in different circumstances. They struggle and fight with other living and non-living beings to obtain and secure resources they require for survival. The difference between animal and human reaction to survival instinct is that while animals resort to fight, humans can apply reason (rationality) and dialogue. The ability to resolve conflicts through reasoning, dialogue and agreement depends on the people’s level of enlightenment about humanity.[8] Rationality is thus, the discovery and consciousness of our common humanity, link, beauty, limits, power and role in the universe.[9]

Humans are self-transcendent beings, who always find themselves unfulfilled and seek to transcend their physical nature or status.[10] The element of self-transcendence in humanity has resulted in many political and scientific achievements, and a deeper understanding of humanity. However, this quest to surpass human nature often creates a DELUSION of being higher humans than others based on privileges or achievements.[11] This delusion of being higher humans leads to socio-political struggle for positions and resources as justification of superiority. Even without achievements, prejudiced people seek pride from believing that there are people who are lower than they are.[12]

As creative beings, humans actualize their potentials in the society[13] by transforming human and natural resources for social utility.[14] This manifestation of creativity and/or its earnings became measures for comparing people’s contributions and importance in the human society. Hence, racism cannot stand on its own without social, economic and political measures for comparing superiority. And then, the contest for racial superiority implies a RATIONALLY RACIAL COMPETITION for creative achievements, social harmony and common good, instead of IRRATIONAL RACIAL COMPETITION of dehumanizing other people. Rational racial competition is like a football match, which is a contest about the team that plays better football against other teams, instead of which team invades other teams’ camps to kill, steal and disorganize them.

Unfortunately, the racial contest for superiority derailed from rational creativity to irrational invasion and seizure of people and natural resources. Though irrational racism had been in human history, its modern form was institutionalized through slave trade, colonialism and neo-colonialism.[15]

From the 15th century, Europeans began invading and abducting people from different parts of the world, especially Africa.[16] The abducted people were transported and forced to work as slaves in Europe and their newly ‘acquired’[17] territory called America. After the abolition of slave-trade, the Europeans began direct and brutal colonialism in Asia and Africa, until India got independence. Europeans shared Africa among themselves by drawing arbitrary lines through kingdoms and communities, for exploiting natural resources and enforcing dependency policies. Hence, several unconsented and often conflicting kingdoms and communities were brutally joined together by British colonialists[18][19] for economic exploitation.[20] During the agitation for independence, the colonialists replaced themselves with Europe-trained politicians, military and officials to sustain their resource interests.[21]

The political structure for frustrating economic and political creativity in Nigeria remains as colonially-created and sustained by foreign policies.[22] The militarized federal government, imposed on several unconsented people, seizes and auctions the different peoples’ resources[23][24][25] according to foreign demand. Today, many intelligent and inventive Africans are restricted from accessing their mineral resources for modern technological productivity. Instead, the colonially-influenced politicians export the crude resources for production to Europe in exchange for foreign currency and consumer products. This is why Africa has remained stunted in productive evolution and uncompetitive in rational racism of creativity and meaningful life.

Racial rivalry and contests are necessary for improving human productivity, social evolution or skills like Cristiano Ronaldo and Lionel Messi’s rivalry. However, when racial contests are made to measure our human-status instead of creativity, they become irrational and beastly. Then, people find any little difference as reason to devour other people, just as the German Nazis roasted millions of fellow white men as inferior species during their holocaust. Humanity may never rise beyond irrational racism, until the basis of rivalry shifts from measurement of humanity-grade to measurement of creativity. And this measurement of creativity may not replace the irrational measurement of human-grade until Africa is liberated of the internalized yoke of colonialism, slavery and unproductivity.

Europe and other parts of the world (recently Asia) remain dreadfully fixated and in need of Africa’s natural resources. However, human rationality demands negotiation and agreement over manipulative forces based on the initial foundations of force and brutality. Thus, Europe and other interfering powers need to evolve from the politics of fear and political interference about African scientific and creative renaissance. Even if they are unwilling to contribute to Africa’s renaissance, they may not continue fighting to hinder it in view of posterity. Humans do not become stronger by making their opponents weaker[26] through political, psychological and religious manipulations and dead seeds. Instead, humans validate their rational strength by competing fairly, even against though opponents, in the spirit of sportsmanship.

[5] Aristotle uses rationality as the defining element of human beings among other animals – Pieter Coetzee. Ibid

[23] Nigerian minerals and mining act 2007 act no. 20, chapter 1, Part 1, Section 1, paragraph 2 – “… all lands in which minerals have been found in Nigeria and any area covered by its territorial waters or constituency and the Exclusive Economic Zone shall, from the commencement of this Act be acquired by the Government of the Federation…”

[24] Nigerian minerals and mining act 2007 act no. 20, chapter 1, Part 1, Section 2, paragraph 1 – “No person shall search for or exploit mineral resources in Nigeria or divert or impound any water for the purpose of mining except as provided in this Act.”

[25] Nigerian minerals and mining act 2007 act no. 20, chapter 1, Part 1, Section 1, paragraph 3 – “The property in mineral resources shall pass from the Government to the person by whom the mineral resources are lawfully won, upon their recovery in accordance with this Act.”

Tags:racism and the spirit of sportsmanship
previous article
How Nigerian beautiful ladies can provoke productivity in Nigeria
next article
Resolving electric power issue in Nigeria