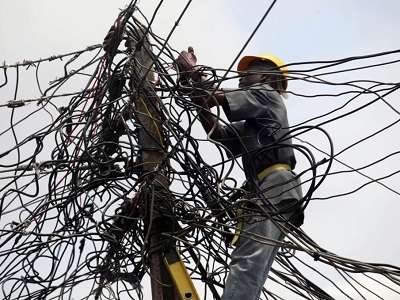 Some Nigerian road-users accuse highway hawkers of damaging roads to create traffic jam (go-slow) for doing business. Whether the accusation is true or false, highway hawkers benefit immensely from thick traffic-jams caused by bad roads. Drivers and passengers who spend hours in traffic-jams get hungry and dehydrated having to patronize the hawkers. As hawkers benefit from traffic-jams on bad roads, so do some people benefit from electric power-failure in Nigeria. Whether they contribute to the darkness through government influence and sabotage or not, they benefit greatly from people’s suffering.

Nigeria is reported to supply electricity to neighbouring countries, and electricity-generating resources to other continents. Despite that, Nigerians have continued to experience insufficient electric power supply since independence. Due to the deficient power-supply, many Nigerians struggle to provide electricity for themselves by acquiring generators and fuel from importers. Those who need electricity for learning or productivity, but cannot afford expensive generators and constant fuel (from importers) stay idle. The air-pollution, idle time, missed opportunity of earning from electric-powered services and pain of staying in darkness affect Nigerians adversely.

Electricity is a form of energy charged from elementary particles, usually supplied as electric current through cables, wires, etc. for lighting, heating, driving machines.[1] This is the type of power utilized in factories, industries, offices, schools and homes for operating different machines and appliances. Electric energy is at the foundation of modern productivity in all productive societies of the world.

How is electricity generated and distributed?

In 1831, Michael Faraday discovered that when a magnet is moved inside a coil of wire, an electric current flows in the wire.[2] Hence, turning propellers in a turbine to spin magnets surrounded by copper wire, circulates electrons across atoms to generate electricity. The energy for turning propellers in a turbine for generating electricity is derived from nature as natural gas, coal, uranium, ocean tide, mountain or winds.[3] In thermal power-plants, fuels like coal, natural gas, bio-mass and uranium are used to heat water until it produces steam to power a turbine and generate electricity.[4][5] Solar photovoltaic panels generate electrical power by converting solar radiation into electricity using semi-conductors. The main materials required for generating electricity are coal, uranium, natural gas, copper and electro-magnets. 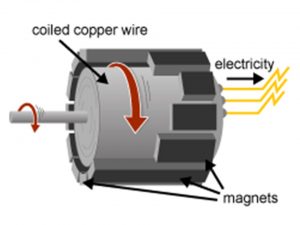 Several processes and devices like transformers are used to distribute electricity to consumers depending on the generation output. An industrialized city of 1 million in the US uses 10,000 MWh or 36 gigajoules per person per capita.[6] The requirement for any developing industrial nation is that at the least one gigawatt (1000MW) of electricity generation and consumption is required for every one million population.[7]

In 1896, British colonialists brought the first Nigeria’s electricity generation through a power plant that was set up in Lagos[8] to serve the colonial officials. In 1929, Nigeria Electricity Supply Company (NESCO) that was formed to build power plants across Nigeria constructed a hydroelectric power station at Kuru, Jos. In 1952 Electricity Corporation of Nigeria (ECN) that was formed to commercialize electricity constructed 132KV line linking Ijora Power Station and Ibadan Power station. In 1962, Niger Dams Authority was established for hydropower transmission and merged with the existing ECN to form the National Electric Power Authority (NEPA). The 1500 megawatts electricity supply was mostly concentrated in the urban areas, until urban migration required electricity from the poorly maintained power sector. In 2001, the National Electric Power Authority was changed to Power Holding Company of Nigeria PHCN, for eventual privatization of the distribution process.

Despite having resources – coal, natural-gas, uranium, copper and engineers – for generating sufficient electricity, Nigeria remains in darkness and unproductivity. Resolving electricity problem in Nigeria may be impossible without understanding economic and socio-political hurdles to electricity generation and distribution.

British colonialists created Nigeria by brutally yoking several dissimilar and unconsented groups and kingdoms together[12][13] for economic exploitation.[14] Before independence, British colonialists brutally extracted and exported Nigeria’s natural resources to their industries, while Nigerians depended on their products. At independence, they replaced themselves with Europe-trained politicians, military and civil servants to sustain the supply of Nigeria’s natural resources.[15] Using the same brutality, Nigerian government seizes and cheaply auctions[16][17][18] mineral resources to former colonialists for foreign money and products. Thus, intelligent Nigerians cannot access resources and support for generating electricity, instead of constantly importing fuel and expensive generators. Despite confiscating resources for generating electricity, Nigerian electricity is allegedly sabotaged by fuel and generator foreign producers and local importers.

Since Nigerians are denied access to resources for general productivity, electricity is seen as luxury, instead of instrument for production. The few people who use electricity for economic activities in the service sector are forced to pay exorbitantly for it. Thus, some Nigerians accuse distribution companies of intentionally frustrating the meter distribution, in order to exploit people with estimated bills. In revenge for exorbitant bills, some Nigerians waste electricity, when available, by powering multiple electric appliances, even when they travel.

To resolve Nigeria’s electricity problem, Nigeria need to define the purpose and urgency of electricity to Nigeria’s economy. Progressive societies are formed by the people’s agreement to educate themselves and collaborate in transforming natural resources to useful commodities. Steady electricity becomes a necessary condition for educating citizens and for transforming natural resources to wealth in factories and industries. If Nigerian electricity is mainly for watching television and enjoying other imported electric appliances, it may never be sustained. But when the different communities in Nigeria see electricity as power for productivity and wealth-creation, they will take it seriously.

Hence, the steps for resolving electricity crisis in Nigeria may include:

Human beings are often afraid of change, especially when have gotten used to advantages in an old order. Despite the advantages we derive from harmful structures, reordering social structures for harmonious growth promises even cleaner advantages. Nigerians will rise, distinguish themselves and demonstrate their productivity in electricity-generation and other forms of productivity.

Tags:Electric crisis in Nigeria
previous article
Racism and the spirit of sportsmanship
next article
The social research for a new and consented Nigeria