Nigeria’s rush to the Fourth industrial Revolution without mastering the first: a costly mistake

Human beings are propelled by the principle of constant progress and advancement from less capacity to more capacity. However, a two-month-old baby that desires to suddenly run like Usain Bolt without passing through the stages may get frustrated. The stages of lying face-down, supporting the neck, sitting, crawling, standing and walking strengthens the baby’s muscular frame for running. Technological advancement is desirable, especially for underdeveloped nations who wish to create wealth and experience social progress. However, without patiently understanding the stages of industrial revolutions, underdeveloped nations may remain frustrated in pursuing fourth industrial revolution.

Some Nigerians express dissatisfaction with Nigerian and African inability to compete in the current global level of industrial production. Some insist that Nigerians should overlook the initial stages of production and focus on competing in modern production. Others suggest that Nigeria should simply import and install foreign machines or industrial plants and begin production immediately. Many of these ‘experts’ studied, lived or worked abroad, in societies with “already-made” social and industrial organization for advanced production. However, since they only joined in those societies’ advanced stage, they may not appreciate the difficulty of rising through the industrial revolutions.

Before the 18th century, the means of production across the world was mainly manual and crude. To increase manpower for production, some people made more children[1] while other people raided other societies for slaves.[2] Since there were no modern machines at that time, many slaves and commoners were required for different stages of production. Several slaves were needed for the work of a modern tractor, car, crane, ship, cotton-mill or other industrial machines. Eventually, the arrangement of labourers in sections of production inspired thoughts of modern industrial production to replace slaves with machines, and to replace manpower (physical energy, stamina and muscles) with other sources of energy like steam, electricity, oil and gas.

Inspiration from industrial organization of slaves resulted in the first industrial revolution[3] in England (1765) that later spread across Europe. It is the change of production style from human labour to application of largescale steam-energy to operate machines for production.

The second industrial revolution brought division of labour by organizing different sections of the society to focus on specific production. Thus, one group focuses on iron/steel for engine or car-bodies, another focused on vulcanizing rubber for tyres or fuel. The division of labour brought focus and specialization for different sections and stages of production in the society. The steel industry began to develop and grow alongside the huge demands for steel. Chemical synthesis developed to bring synthetic fabric, dyes and fertilizer. Methods of communication also changed with the invention of telegraph and telephone, while transportation methods changed with the emergence of automobile and plane at the beginning of the 20th century. 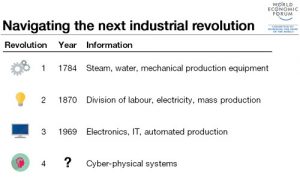 Nigeria and many African countries struggle to choose between appearing productive by importing machines and actually becoming productive by industrializing. Unfortunately, their colonially-imposed social structures seem unsupportive for the necessary industrial conditions of research and division of labour. “Africa’s nation states were formed by foreigners, lines drawn by Europeans on maps of places they had often never been to. They carved out territories, cut up kingdoms and societies of which they had little idea… (African countries) lack a common conception of nationhood.”[11] For obtaining mineral resources for their industries, European colonialists brutally yoked several African kingdoms and communities under a federal government without the people’s consent.[12] Before leaving at independence, colonialists replaced themselves with Europe-trained indigenes to continue getting mineral resources in exchange for consumer goods.[13] Hence, instead of sectionalizing their society for specialization and industrial collaboration, the imposed governments centralize all communal resources for colonialists.

Presently, many Nigerians trying to venture into technical production are frustrated by the absence of an industrial support system. The cost of individually forming different parts of a particular gadget or commodity instead of focusing of one is too much for producers. Without benefiting from the multiplier effect of specialization and bulk-production, Africans spend more time and money to produce individual units of a commodity like car or bicycle. For instance, car manufacturers need support of steel-industry for body-parts, rubber-industry for tyre, glass-industry for windscreen, leather-industry for interiors, etc. The absence of these industries persists because the imposed government seizes all the mineral resources that could have been used by their different owners to focus on mass-production of single parts.

Though we are not currently interested in competing with already industrialized societies, we do not have to re-invent the wheels. We simply want to be able to scientifically and technologically utilize our natural resources in solving our problems. Thus, we can leverage on the industrialized societies’ progress to learn and transform our methods and tools of production. Some industrialized societies may be unwilling to assist our industrialization efforts in fear of our independence from their finished goods. In fear of losing CHEAP mineral resources, they may seek to distract us by injecting conflicts, insecurity, chaos and misinformation. However, even if they wish to frustrate our learning, for our perpetual dependence on them, we must learn and progress! God bless you and humanity!

[1] Many Africans married more wives to get more children who would contribute to farm or other forms of production.

[6] It mainly used transistors and microprocessors