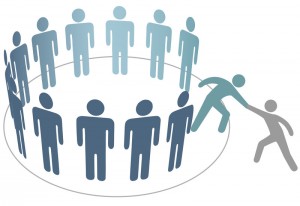 Before admission into a group, school or institution, individuals make inquiries, express interest and sign undertakings to join. Once they are properly admitted, they submit themselves to the rules guiding the group, and can then contribute their views. However, when people are grabbed and hurled into a group (e.g. military), they always require force to stay or obey the rules. If some persons are punished/killed while trying to escape, others will stay and obey in fear, waiting for chance to escape. Referring to people as disobedient members of a group without seeking their initial consent to be part of the group contradicts the natural order of agreement to be before agreement to act.

A Nigerian twitter user was seriously criticized for saying that he would never recite the Nigerian anthem or pledge. He insisted that Nigerian public offices were created to milk people’s wealth for politicians and their foreign partners. Likewise, some people from various parts of Nigeria regret being part of such a disorganized society lacking productive foundations. The Ipob[1], Opc,[2] Mosop,[3] NDA,[4] other groups and persons occasionally agitate against Nigerian social structure or threaten to secede.

Different Nigerians disagree in their attempt to prescribe actions that are befitting for being good Nigerian. They randomly project actions and ‘attitudes’ for reaching Nigeria’s ‘Promised Land’, such as obeying rules or loyalty to Nigeria. While some people suggest that Nigeria should be restructured, others claim that Nigeria only needs selfless politicians to manage/share resources. However, many fail to view Nigeria historically from the four defining causes of existing things: what, how, who and why. The failure to consider and address these primary causes before prescribing “Nigerian” actions exemplifies putting the cart before the horse.

Agreement to be follows from the defining causes of being

People define chair from the reverse order of formation: WHAT is it, HOW is it, WHO made it and WHY. The proper order of becoming is: WHY make chair, WHO will make it, HOW will it be and with WHAT.

After building his house, a man feels the need to have chairs for relaxation in his new house – WHY.

He calls a carpenter who makes chairs – WHO.

The carpenter draws different styles of chairs for him to choose how his chair will be – HOW.

He gets specific materials that will support the style of chair he has chosen to make – WITH WHAT.

If he uses materials that do not support the style or purpose of the chair, the chair-project will fail. However, if the owner decides to convert the chair to table, the carpenter rearranges the style and materials for a table.

Forming human institutions or groups using force, without people’s consent and support for the style or purpose predicts failure. Without informed consent and support of people within a group, rebellion, sabotage and conflicts may never cease in the group. The primary purpose for forming a group and the sincerity towards the purpose determines the people’s commitment to the group.

The causes of being Nigerian

Appraising the Nigerian project requires evaluating its defining causes: what is it, how is it, who made it and why.

Despite all the claims to bring better life, Nigeria is still moving according to the exploitative purpose of its creation. It still seizes people’s production resources for foreigners, and hopelessly depends on foreign products for survival. Since the purpose of creation has not changed, those hoping for ‘Promised Land’ of imported paradise are headed for disappointment. The hope for developing a ‘Promised Land’ may never come when people are held together at gunpoint. Hope will come when the different brutally-merged communities discuss and agree to be partners for a defined purpose. From agreeing to be partners towards a noble purpose, they can then agree on ACTS necessary for achieving their common purpose.

This agreement and definition of a new purpose can only be effective after the distinction of the ethnic communities and their resources. Nigeria is not yet “one nation bound in freedom, peace and unity” but in colonial scheme of brutal exploitation. And until the people are given a chance to agree to be Nigerian for their own purpose, there may not be a suitable Nigerian ACT towards freedom, peace and unity.

Agreement to be part of a group precedes and demands responsibility for acting within the group.

[3] Movement for the survival of Ogoni people