Stop blaming Nigerian politicians: they did not set nor understand the stage 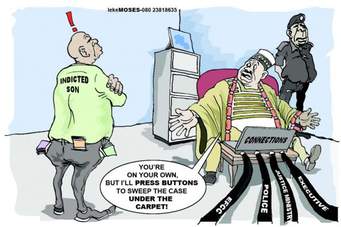 A monk distributed different seeds and portions of lands to six neighbours in a village, so they can cultivate for survival. Each person cultivated his land to feed himself and have surplus to exchange for other neighbours’ desirable products. Later, a gun-wielding stranger invaded them, seized their lands and brought his own people to cultivate the lands with foreign seeds.[1] To avoid blame, the stranger agreed that one of the six neighbours will be collecting and distributing shares of the foreign harvests to the others. So every four years, these neighbours fight to elect someone who will be collecting their “share” of foreign harvests. The neighbours became distracted from recovering their lands for cultivating their seeds, instead they blame each sharer for unfair sharing. Eventually, these neighbours raised their children and grandchildren in this foreign-harvest collection and sharing tradition. Their grandchildren continue begging to work for the stranger, or hoping to elect a better sharer, whose sharing formula will satisfy everybody’s desire.

Many people blame Nigerian politicians and their “corrupt” practices for all the problems in Nigeria. They criticise politicians for using “Nigeria’s money” for exotic cars, mistresses, mansions and private jets, instead of feeding people. Their demands for development often focus on food, roads, electricity, hospitals, cars, houses, security, administrative jobs and more money. These items are expected to be procured from foreign industries to satisfy every Nigerian’s desire. Despite opposition’s criticism of different regimes and resultant coup-d’états or voted regime-changes, every new government fails to satisfy these needs. And no sooner had a new government began than they started receiving insults and corruption label for the same reason.

About 180million Nigerians expect to be daily fed, clothed, housed, secured, educated, medically-checked, entertained, payed and enabled for communication and transportation. And the government is expected to procure the appropriate materials (amenities) from foreign companies in exchange for some people’s mineral resources. However, these 180million people from different communities are not allowed to use their various mineral resources to produce and exchange what they need.[2] Instead, Nigeria’s colonially-imposed government seizes and exports all ethnic communities’ mineral resources to former colonialists and foreigners. Then, Nigerians are urged to become distributors for the foreign companies, in order to complement the government’s sharing.

Operant conditioning is a gradual but effective method of programming people to behave in specific ways without questioning. It is a modern tool for people using mass-media, religion, laws and distorted education to indoctrinate and control people. It uses populist education that provides people with easy but unevaluated responses for defending their decisions and actions. This populism is opposed to philosophy, which teaches people to critically evaluate the root-causes of their beliefs, actions and decisions. All known Nigeria’s political players were born into a colonial system that trained them to follow colonial design. They were educated, employed, constantly supervised, and later promoted to occupy the colonialists’ offices for exploiting a country of unconsented people.[3]

Humans search for safety, pleasure and fulfilment by collaborating with other people to develop and utilize their resources for productivity. Unfortunately, Africa’s encounter with colonialism distorted and replaced this natural order of productivity with an abysmal socialism known as commonwealth. This is the colonially infused practice of national dependence for foreign products in exchange for specific communities’ mineral resources. Since the people are not needed for local productivity, the colonial native successors can greedily amass the foreign exchange.

Colonialists formed Nigeria by brutally binding various unconsented kingdoms and communities under a militarized government[4][5] for exploiting resources.[6] They brought in foreign institutions to destabilize and replace different African native forms of education, culture, industry, religion and governance. But they purposely failed to introduce modern industrialization[7] so that the brutally-merged people will not collaborate in using their resources for productivity. Instead, they used the foreign institutions to structure the haphazardly-created African nations to export mineral resources for foreign products. Before independence, they replaced themselves with Europe-trained loyalist-indigenes[8] to continue exploiting people’s mineral resources[9][10][11] for foreign consumer goods.

It may be adequate to blame Nigeria’s politicians, not colonialism, for Nigeria’s situation:

On the contrary, blaming Nigeria’s politicians for Nigeria’s problems is like blaming a trained and equipped bully after providing his victims.

The international communities’ interest in blaming Nigerian politicians for Nigeria’s woes does not provide solution. Instead, it increases the level of hopelessness among Nigerians about the possibility of a better Nigeria. A friend who is ALWAYS interested in pointing out my partners’ faults may not be a good friend. A good friend identifies the good between me and my partner and brings suggestions for a sustainable and collaborative productivity. Thus, all intellectuals, diplomats and allies castigating Nigerian politicians without practical solutions for collaborative productivity do not qualify as friends.

SO WHAT SHOULD WE DO?

Progressive societies are formed by people’s agreement to collaborate in developing and utilizing their resources for producing what they need. So, the main scale for measuring social progress is productivity, then harmony, security, increased life expectancy and meaningful life. Unproductive societies that depend on importation for survival at the cost of abundant human and mineral resources are not progressive. Hence, Nigerians may not continue waiting for the same colonial successors as messiahs to import and sufficiently share foreign products. Nor will they continue in the post-colonial blame-games and accusation of politicians, other tribes and peoples. Instead, Nigerians will study themselves, their resources, industrial potentials, compatibility and prospects of productive collaboration.

This study will be followed by a practical outreach for social reorientation in different parts/languages in Nigeria. When Nigerians understand the root-causes of their unproductivity and the solutions to them, they will gradually adjust to rebuild Nigeria. Then they will resist the politicians as colonial assistants for exploitation who deny people the opportunity for productivity. The politicians and their associates are also humans who want peace and progress, but may lack the understanding and faith. They do not rig themselves into political offices by themselves; people without faith in Nigeria collect money to rig and announce false results.

Stop expecting a politician messiah to magically rebuild Nigeria, its people, institutions and industries, which they cannot single-handedly accomplish. By reaching out to one another and working together, we all become the messiah and builders of a new Nigeria. If you cannot collaborate productively with your neighbour for satisfaction and exchange, then Nigeria can never be better. Our social foundation for productivity and progress is a connection of individually productive persons who combine their productivity for a better society. When Nigerians experience the fulfilment from productivity, then they will be disposed to reorder their society for productivity and justice.

[1] The monk represents God; His children are different tribes in Nigeria; the seeds are culturally productive ideas; the land are mineral resources; the stranger is British colonialists; the stranger’s workers are the multinational companies; foreign harvest are European products.

Tags:Nigerian politicians
previous article
Building the faith for a new Nigeria
next article
Africans do not read: how true, why?