Africans do not read: how true, why? 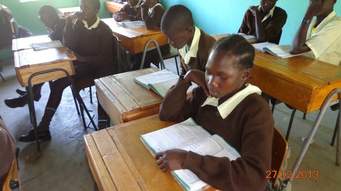 Hypocrisy is caging different groups of lions and blaming them for not hunting or learning to hunt like other animals. Due to extreme hunger in the cage, some of the lions attack and devour others to survive in the cage. The jailer trains and feeds few big lions to control and restrict the other lions from exploring the forest for hunting. Yet, the jailer and the controlling lions blame the caged lions for being physically and intellectually lazy to learn hunting.[1] Learning a skill without the opportunity to productively practice it discourages people from learning. Likewise reading without direction, desire or opportunity to implement what is read discourages reading.

Some westerners easily reiterate a derogative cliché that “if you want to hide something from a black man, keep it inside a book”. In condemnation, such people hastily conclude that Africans don’t read without asking why or considering their precolonial forms of education. Recently, some Africans have gradually started to accept and internalize this description as their accurate and indisputable feature. They care less about the effects or practicality of the materials to be read nor their truth-value. They are simply interested in imposing the blame about Africa’s underdevelopment on their regular intimidated scapegoats – African politicians and peoples.

Reading is one of the methods through which human beings obtain knowledge. Other ways of getting and sharing knowledge include observation, oral tradition, demonstration, apprenticeship, proverbs and stories. The main purpose of seeking knowledge is to apply it in developing oneself for securing and managing one’s environment. The result of this knowledge-driven environmental management is to provide social and material necessities for living a happy life. Hence, when a source or type of knowledge fails to provide the socially-responsive result, people lose interest.

Colonialists formed Nigeria by brutally binding former unconsented kingdoms and communities under a militarized government[2][3] for exploiting resources.[4] They killed those who resisted,[5] and trained few controllable ones to assist them in controlling the people and exporting their resources.[6] Before leaving at independence, colonialists fixed a constitution to guide their indigenous replacements[7] in seizing[8][9][10] and exporting people’s resources, to import consumer products from Europe.[11] To appear democratic, Nigeria’s colonially-made government created ministries, states and local governments to share few foreign products as infrastructure, salaries and charity handouts. Since then different Nigerians, lacking a common conception of nationhood,[12] struggle to occupy the colonially-made offices as the major industry for enjoying foreign money from seized mineral resources.[13]

Currently, surviving in Nigeria’s colonially-imposed political structure does not require reading. Instead, it requires ability to adopt the colonial instruments for installing Nigerian government, which are violence and cheating. Many Nigeria’s politicians can barely read or sustain productive discussions about their society. Yet, the live lavishly and control the society using their thugs in those colonially-imposed offices and institutions. However, Nigerians who read may not make social impact, since they cannot match the violence needed for occupying the colonially-made positions. Instead, they remain unemployed, travel outside or gladly become assistants to the politicians who fought to occupy public offices. The people who are supposedly enjoying comfortable life in Nigeria didn’t get it through reading.

The two areas for validating knowledge in a society are ‘harmonious social network for human functionality’ and ‘sufficient industrial productivity’. The chances for a harmonious social network for productivity is distorted by the brutal colonial amalgamation. And the chance for rich industrial productivity is hampered by the colonially-imposed law for government to seize and export people’s mineral resources. The effect of this colonial heritage is Nigerian government’s human right’s abuse in Niger Delta and other places with minerals.

The type of education that was colonially handed down to Nigeria has proven incapable of effecting necessary changes in Nigeria. It appears that Nigerian education structurally distracts Nigerians from retrieving their resources for producing what they need. They teach the brilliant ones to cram and use colonially-imposed laws for restricting people who are deprived of their production mineral resources. They teach the strong ones to assist in extracting and exporting the seized mineral resources, or to militarily protect the exploiters from their victims. And they teach others to import, advertise, install, assemble, repair, repackage, prescribe, modify, count, survey, report and distribute foreign products.

“The educational system still trains people for a lifestyle that is unavailable and unaffordable to most Nigerians… alienates the Nigerian from his environment… In contrast to our pre-colonial education, which was tied to our ways of life.”[14] “In the colonial society, education is such that it serves the colonialist… In a regime of slavery, education was but one institution for forming slaves.”[15]

Now, many Nigerian students study to make good grades in order to qualify for the few administrative and marketing opportunities. Unfortunately, many Nigerian graduates are dangerously unemployed and unable to access resources to produce what they need. Presently, Nigerian education has almost become an instrument of indoctrination into a lifestyle that forbids initiative, creativity and primary production. Thus, the militarized and resource-seizing political structure that was colonially-imposed on various unconsented kingdoms and communities remains a cage of unproductivity. And when education becomes an indoctrination for neo-colonialism instead of local productivity, people lose interest in it.

The first step in judging a caged lion’s willingness to learn hunting is to release it from the cage to access the forest. As long as it is caged, and cannot explore the forest to see the animals it could hunt, there may be no zeal for learning hunting. Likewise, the first step in judging African communities’ willingness to read is to cede their resources for them to learn and produce what they need. As long as African communities are bound under the colonially-imposed and resource-seizing governments, reading imported and mind-conditioning books cannot continue. As long as foreigners (especially Europeans) continue exploiting African resources using the tyrannical forms of government they imposed on various unconsented kingdoms and communities, they lack the moral authority to judge Africans’ readiness to read or not.

Study without desire spoils the memory, and it retains nothing that it takes in.

[8] Nigerian minerals and mining act 2007 act no. 20, chapter 1, Part 1, Section 1, paragraph 2 “… all lands in which minerals have been found in Nigeria and any area covered by its territorial waters or constituency and the Exclusive Economic Zone shall, from the commencement of this Act be acquired by the Government of the Federation…”  “No person shall search for or exploit mineral resources in Nigeria or divert or impound any water for the purpose of mining except as provided in this Act.”  “The property in mineral resources shall pass from the Government to the person by whom the mineral resources are lawfully won, upon their recovery in accordance with this Act.”

previous article
Stop blaming Nigerian politicians: they did not set nor understand the stage
next article
Authority mindedness and the death of initiative in Nigeria