Authority mindedness and the death of initiative in Nigeria 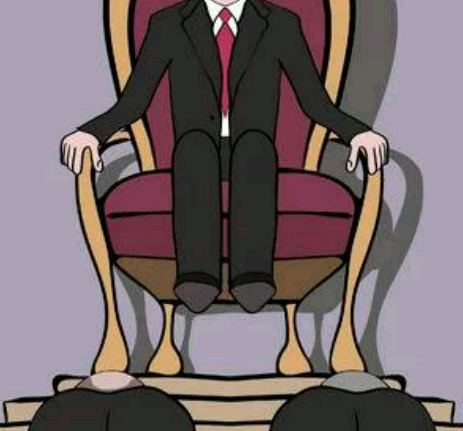 “In our own day, there has been too much of a tendency towards authority, and too little care for the preservation of initiative. Men in control of vast organisations have tended to be too abstract in their outlook, to forget what actual human beings are like, and to try to fit men to systems rather than systems to men.”[1]

An engineer in a car manufacturing company built a world class car that impressed the CEO. While trying to bring the car from workshop to the showroom, they noticed that the car is 2 inches taller than the entrance. The painter suggested bringing it out and reworking the scratches and the engineer suggested breaking the workshop’s entrance and reworking it later. After long arguments between the experts, an underrated watchman suggested that they slightly deflate the tyre, and it worked.[2] Without objectively evaluating proposal’s practical values, societies remain stagnated by suppressing or ignoring initiatives that are not backed by rigid conventional authority.

Appeal to authority is a logical fallacy of accepting statements simply because they came from people in authority, not because they are true. A common justification for many practices in Nigeria is ‘it came from’ pastor, prophet, professor, politician, commander, ‘oga-at-the-top’, king or any other authority. Some say: ‘we are just following orders’, ‘that’s how it has been done since 1832’ or ‘that’s the law’. Thus, many fail to responsibly evaluate the immediate and eventual effects of the directives or orders they practice. Instead, while running from responsibility, they surrender their freedom of thinking to other people or authority, since freedom involves responsibility.[3] They prefer having an authority to blame or defend, instead of objectively evaluating different proposals based on their merits.

Authority and its purpose

Authority is ‘the power to give orders to people.’[4] It is, “the people or an organization who have the power to make decisions or who have a particular area of responsibility in a country or region.[5] Authority is a necessary tool for organizing or leading people to intended goals. It empowers persons to direct policies, allocation and use of resources in a society to avoid chaos from conflicting ideas in the search for progress in the society. The developmental direction of any society depends on the nature and disposition of the authority in that society. Though there are several spheres of authority, this article focuses on political authority as the controlling centre of other authorities in a society.

How is political authority acquired?

Political authority can either be developed organically from the people, or imposed on a people using force or threat.

ORGANIC AUTHORITY or democracy develops from a people’s free agreement to collaborate under a chosen order to achieve their aims. The institutions derived from or allowed by organic authority are directed and constantly adjusted to the people’s aims – common good. Though powers can be abused in organic authority due to some individuals’ betrayal, the system is primarily directed to common good. And the people collectively resist official misuse of authority (military, academic, legal, financial or religious). To avoid public deception and authority abuse, intelligent people promote ideas that support the primary aims of common good. Thus, such societies adopt pragmatic postures to agree or disagree with authority based on capacity of policies to lead to common good.

Public enlightenment becomes necessary under organic authority to defend people from media manipulations. Thus, Frank Herbert insists that “If you think of yourselves as helpless and ineffectual, it is certain that you will create a despotic government to be your master. The wise despot, therefore, maintains among his subjects a popular sense that they are helpless and ineffectual.

IMPOSED AUTHORITY is taken from people through violence, and depends on violence and constant threat to survive. Most institutions derived from or allowed by imposed authority are redirected to support the imposers’ purposes – mainly exploitation. The political, academic, military, religious, legal and financial institutions are fundamentally twisted to physically and mentally contain, distract and control the exploited people. Since the institutions are tuned for the imposers’ exploitative purposes, people-oriented initiatives are seen as rebellious distractions to be suppressed. While the institutions adopt conformist dispositions to the status quo of exploitative established order.

Political authority and its branches in Nigeria

Colonialists formed Nigeria by brutally binding various unconsented kingdoms and communities under a militarized government[6][7] for exploiting resources.[8] They brought in foreign institutions to replace the various forms of education, culture, industry, religion and governance in Africa. But they purposely failed to introduce modern industrialization[9] so that the brutally-merged people will not collaborate in using their resources for productivity. Instead, they used the foreign institutions to structure the haphazardly-created African nations to export mineral resources for foreign products. Before independence, they replaced themselves with Europe-trained loyalist-indigenes[10] to continue exploiting people’s mineral resources[11][12][13] for foreign consumer goods.

The absence of harmonious cohabitation and industrial productivity despite the annual outpouring of doctorate, masters and college graduates suggests a grip of imposed authority. Due to the colonially-imposed common-wealth-law, Nigerians lack access to study their mineral resources for eventual productivity and harmonious cohabitation. With this political limitation, many students are made to study courses that are unrelated to their local interests. Eventually, some of them are assigned project topics that advance some supervisor’s international research, without relating to the student’s local interests. And those who choose projects from their desire for local impact get their works abandoned on shelfs and later disposed. Unfortunately, a students’ proposals may never be viewed on its merits against superficial postulations from school dons, doctors and professors.

This unquestioned regard for authority over practical truths for progress extends beyond academia to the military, legal, religious and financial institutions. By militarily seizing the resources people could use for producing what they need, the colonially-imposed government makes everybody dependent on these imported institutions for survival. Other people who question these institutions’ intentions or fail to join or flatter them are continuously oppressed and exploited.

Nigerian armed forces, which prevents Nigerians from revolting against exploitation observe ‘strict hierarchies, unwavering obedience to superiors, and an acceptance that each personnel is just a small uninformed and unthinking cog in a big machine.’[14] Many religious institutions that could inspire social renewal and productivity now turn people to naive and unproductive miracle-beggars. And the laws deriving from Nigeria’s colonially-made constitution steadily alienate Nigerians from their natural rights. It ultimately provides loopholes for intimidating and exploiting the common man who is not connected to the imported institutions.

Overcoming the abuse/rigidity of authority in Nigeria

The first step in readjusting authority is knowing who, how and why it was formed, before reordering method and intention. British colonialists formed Nigeria’s authority using institutionalized violence and deceit which they handed over for long-term exploitation. To reorder the effect and disposition of authority in Nigeria, Nigerians themselves will re-create the authority for their own wellbeing. First, Nigerian ethnic communities and individuals will begin to think for their economic independence, without depending solely on conventional institutions and authorities. Then a sincere government can arise from this new disposition to readjust the system of authority through the following:

Being an authority does not imply being above error or knowing everything, it means being regulated and certified as credible for common good. Because of their extensive influence, propositions from people in authority require thorough scrutiny for common good. Also, propositions from people without conventional authority deserve serious considerations for their possible contributions to progress and common good. Every genius is nature’s manifestation of itself which can come through a professor, undergraduate, dropout or gateman. By conforming to authoritarian status-quo, people lose the initial fire for the genius they wanted to bring into the world. And the academia tend to restrict the purview of knowledge in their authoritarian world. “Big leaps of personal and social progress occur from chasing ends, not conforming to means. If you want to be the best at something, build the best system to get there.” – Isaac M. Morehouse

[1] Bertrand Russell, Authority and the Individual (1949)

[11] Nigerian minerals and mining act 2007 act no. 20, chapter 1, Part 1, Section 1, paragraph 2 “… all lands in which minerals have been found in Nigeria and any area covered by its territorial waters or constituency and the Exclusive Economic Zone shall, from the commencement of this Act be acquired by the Government of the Federation…”  “No person shall search for or exploit mineral resources in Nigeria or divert or impound any water for the purpose of mining except as provided in this Act.”  “The property in mineral resources shall pass from the Government to the person by whom the mineral resources are lawfully won, upon their recovery in accordance with this Act.”

Tags:Authority mindedness
previous article
Africans do not read: how true, why?
next article
Redirecting religious structures for productivity in Africa