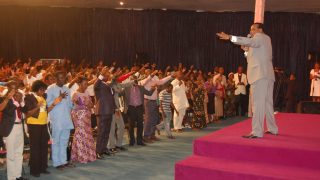 Why give money to the church? Justification for church donations in the new era Jon always flaunted his muscular cousin as consolation or excuse whenever people mocked him for being fat and weak. Instead of building his own physique, Jon continuously buys gifts for the muscular cousin in order to continue depending on the cousin’s status for consolation and defence. Our imperfections, especially in having meaningful lives, often make us attach and depend on external objects that seem better than us. Thus, instead of redirecting ourselves to worthy life purposes, we fortify, join and flaunt other objects and personalities as excuses or consolation for our empty lives. Without understanding their religious purpose in the society, some Africans focus on building religious structures while neglecting human development for productivity.

Recently, there has been an increased competition among Nigerian churches and religions about the size and beauty of their structures. These structures include the physical buildings, auditorium, chapel, grotto, vessels, exotic vehicles, net-worth and the corporate structure of branches, church-workers and members. Focusing on this structural competition, some religious leaders employ different tactics to financially and intellectually extort even the poorest people. Now, it seems that the purpose of religion has shifted from spiritual direction for productive life to building magnificent structures.

While industrial, financial, legal, health, security and government institutions manage physical aspects of the society, academia and religion manage the nonphysical. Respectively, academia and religion direct and motivate the physical institutions to utilize human and material resources for producing socially-relevant products and services. In turn, the material-oriented institutions supply the materials needed for academia and religion’s material satisfaction and functional efficiency. Thus, in progressive societies, magnificent churches, chapels, grottos, cathedrals, vessels, vestments, paintings and designs are manifestations of the society’s material productivity. They flow from and show the abundance of the society’s human and material wealth, creativity and high standard of living.

Colonialists formed Nigeria by brutally binding various unconsented kingdoms and communities under a militarized government[1][2] for exploiting resources.[3] They installed foreign institutions to destabilize and replace the indigenous forms of education, culture, religion and governance. But they purposely failed to introduce modern industrialization[4] so that the brutally-merged people will not collaborate in using their resources for productivity. Instead, they used the foreign institutions to structure the haphazardly-created African nations to export mineral resources for foreign products. To make their institutions appear superior, colonialists demonized African institutions as primitive and evil. Before independence, they replaced themselves with few Europe-trained loyalist-indigenes[5] to continue exploiting people’s mineral resources[6][7][8] for foreign consumer goods.

Following the colonial design, most industrial materials used for building religious structures in Nigeria are imported in exchange of mineral resources. People create wealth by applying scientific intelligence on raw materials as mineral resources and agricultural products[9][10] before distribution. The material tools for creating wealth by applying scientific knowledge on raw materials come from mined mineral resources. Thus, restricting people’s access to their mineral resources means impoverishing them by restricting their ability to create wealth. This leads to the increase of poverty, crimes, diseases, social disharmony, unproductivity, dissatisfaction and overdependence on importation.

Presently, religions that should motivate people to study and retrieve their resources to create wealth for solving societal problems, encourage people to seek miracles by contributing to building religious structures. Using emotionally persuasive tools of curse-threats and blessing-promises, some religious leaders convince people to dedicate their lives to ‘God’s house’. While dedicating their lives to ‘God’s house’, they alienate themselves from their contributions to societal progress. Taking advantage of this social alienation, some politicians import and donate more religious structures to distract people from studying and retrieving their resources for wealth-creation.

Religious institutions are extremely necessary for radically motivating and directing people towards justice, productivity, peace and progress in the society. Their physical and corporate structures can be avenues for manifesting the people’s development, harmonious productivity, wealth and standard of living. However, without understanding its social roles, religion may continue serving as a weapon of mass distraction, exploitation and destruction.

Reordering religious structures for productivity means redirecting their doctrinal focus from seeking unsustainable, ungeneralizable and non-replicable miracles to motivating people for organizing the society towards harmonious coexistence and productivity. Since Nigeria was colonially merged for exploitation, the first religious purpose is to motivate the brutally merged kingdoms and communities to discuss and agree on conditions for a productive collaboration.[11] This will require a social research to acknowledge the different Nigeria’s peoples and their respective lands and resources for productivity.[12] To achieve this in Nigeria, a sincere government may take these steps:

[6] Nigerian minerals and mining act 2007 act no. 20, chapter 1, Part 1, Section 1, paragraph 2 “… all lands in which minerals have been found in Nigeria and any area covered by its territorial waters or constituency and the Exclusive Economic Zone shall, from the commencement of this Act be acquired by the Government of the Federation…”  “No person shall search for or exploit mineral resources in Nigeria or divert or impound any water for the purpose of mining except as provided in this Act.”  “The property in mineral resources shall pass from the Government to the person by whom the mineral resources are lawfully won, upon their recovery in accordance with this Act.”

Tags:religious structures
previous article
Authority mindedness and the death of initiative in Nigeria
next article
Leading the family beyond financial security to fulfilment