Role of traditional rulers for a new Nigeria 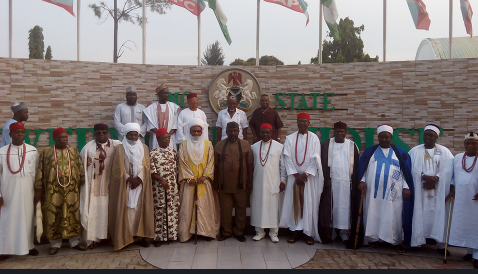 Getting free education, healthcare, school feeding and other social programs reduce the economic burden of raising kids. The idea seems excellent until the ‘free’ giver starts interfering in people’s lives and choices; for he who feeds you controls you. By being addicted to free gifts, people lose the courage and capacity to provide for themselves, or resist the givers’ interference. Leaders or rulers coordinate their people’s productivity and civil relationships for security and progress in their territory. But, when they get addicted to external or internal free gifts, they lose the power to coordinate their people for security and progress. The desperate dependence of traditional rulers on postcolonial government for validation and sustenance highlights the destructive effect of colonialism.

Before colonialism, different kingdoms and communities lived distinctly and managed their territories, resources and cultures in various parts of Africa.[1][2] The different kingdoms and communities had their specific ways of making or removing rulers for their security and progress. While leadership in some areas were inherited by royal family members, others were elected by community elders. After coronation, traditional rulers became custodians of the people’s customs, traditions and wellbeing. Working with elders and chiefs, traditional rulers direct the management of resources, educate their people and govern their respective communities for justice, productivity, peace and progress.

Unfortunately, European colonialists invaded with machine guns[3] in search of foreign territories and raw materials. Using gun-power, colonialists killed, deposed or exiled the resistant traditional rulers, before installing and paying submissive ones to enforce colonial policies on the people.[4] They also created and paid warrant-chiefs to control and tax people in communities they did not understand its taxing system.[5] So, the different and unconsented kingdoms and communities were violently merged under colonial offices[6] for exploiting resources and labour.[7][8] And the colonialists’ scanty social services were meant only to facilitate exploitation; they were not given to any Africans whose labour was not directly producing surplus for export to Europe.[9]

“The main purpose of the colonial system was to train Africans to help man the local administration at the lowest ranks and to (protect) private capitalist firms owned by Europeans… That meant selecting a few Africans to participate in the domination and exploitation of the continent as a whole… and to instil a sense of deference towards all that was European and capitalist.”[10]

Before leaving at independence, colonialists replaced themselves with their native assistants and fixed constitutions to guide them[11] in seizing and exporting people’s resources[12][13][14] for European consumer products.[15] Thus, colonialists installed a divide-and-rule system between colonial successors who seize people’s resources for export and the defeated kingdoms and communities. To seem democratic, the colonially-imposed government created states, local governments and ministries to share few foreign products as infrastructure, salaries and charity handouts. Since then people struggle to occupy the colonially-made offices for controlling the sharing formula of seized resource-revenue.

Being subjected under postcolonial government offices, traditional rulers continue the colonial duties of controlling the people at the lowest ranks and rural areas; while the postcolonial government seizes and exports the resources people could have used for modern production. In return, the postcolonial government and foreign companies pay salaries and royalties to traditional rulers for controlling the exploited people. During elections, some traditional rulers support politicians who will advance the colonialists’ exploitative agenda. Now, both communities with mineral resources and those without resources, all, demand funds from the government’s seizure and auction of people’s resources. The communities without discovered resources for exploitation temporarily support or benefit from the exploitative system while waiting to be exploited last. This current roles of traditional rulers weakens the people’s zeal to reclaim their lands, discover and utilise their resources for productivity, as they recline like helpless beggars. This overdependence also exposes traditional institutions and communities to government interference like arbitrary kingdom-balkanization, dethronement, custom distortions, invasions and inability to defend themselves.

Getting a prosperous Nigeria requires that all kingdoms and ethnic communities develop their capacity to produce, industrially link and internally trade what they can from their lands. But Nigeria may never experience such progress if traditional rulers that should inspire people’s local productivity remain submissive middlemen for postcolonial exploiters. So, Nigeria may never progress until the traditional rulers inspire their respective peoples to look inwards for modern productivity and trade. Then the roles of traditional rulers for a progressive Nigeria will include:

Now, after the colonial invasion for seizing and exporting people’s resources, individuals are rewarded for serving the colonially-imposed government. The postcolonial (civil) service comes directly through public administration, academics and military, or indirectly through distorted religious practices and marketing of foreign goods and services. Thus, many people’s reward increase based on how they assist in controlling, distracting or exploiting the people and their resources for colonial export. This crude resource-exportation diverts people’ mind to serving foreigners, instead of seeking resources to produce, use and trade commodities within.

To get a prosperous society, traditional rulers and institutions will redirect their people to seek pride in productivity for dignified sustenance; and not depending on other people, especially former colonialists, for quick-depreciating finished products from exploitative sources. For the true measure of a people’s pride lies in what they can produce, not what they can consume. This implies modifying, modernizing and publicizing native proverbs, tales and festivals that celebrate real productivity and integrity. Hence, they can create role models by recognizing and awarding productive people, not just anybody with unjustifiable wealth.

A father instils confidence in his family members by motivating them to find and develop their abilities to protect and provide for themselves. Not by positioning them to perpetually beg and depend on other people for survival, despite the moral compromises. By appreciating the dignity of productivity over the fear-induced dependence, traditional rulers will look beyond the colonially-imposed idea of commonwealth. Then they will be eager to develop themselves and negotiate with others in a true national conference for a new Nigeria.[18] Freeing themselves from the laziness of colonially-imposed commonwealth will not be aimed at insulting colonialists, but establishing, appreciating and utilizing your different cultures and environmental resources for productivity.

[12] Nigerian minerals and mining act 2007 act no. 20, chapter 1, Part 1, Section 1, paragraph 2 “… all lands in which minerals have been found in Nigeria and any area covered by its territorial waters or constituency and the Exclusive Economic Zone shall, from the commencement of this Act be acquired by the Government of the Federation…”  “No person shall search for or exploit mineral resources in Nigeria or divert or impound any water for the purpose of mining except as provided in this Act.”  “The property in mineral resources shall pass from the Government to the person by whom the mineral resources are lawfully won, upon their recovery in accordance with this Act.”