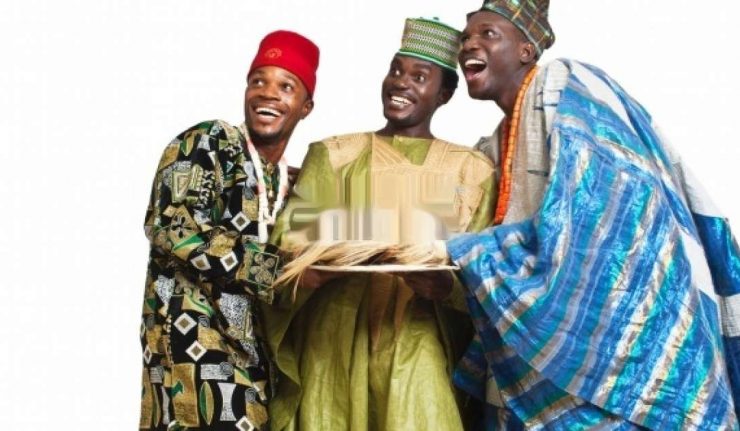 A car is made by assembling different parts to work together in agreement. These parts include the gearbox, engine, axle, fuel pump, battery, plugs, breaks, steering and all other parts. The car functions well when all the mechanical parts are working well on their own before being and properly connected to the other parts to form a full functioning car. Likewise a prosperous nation is an assembly of various kingdoms and communities who are productive and responsible on their own before agreeing to live and work together as one. By maintaining and using their various cultures to work together, instead of denying their cultures as cultural neutrality, they increase their productivity, security and wellbeing.

In their effort to gain support from more of the masses within a political area, some politicians try to deny the differences between people and their various cultures. They try to deny the differences between ethnic communities, ethnic groups, tribes and other levels of social groups. This happens mostly in a country with opposing communities and cultures, where political candidates seek to gain popularity from all by denying their specific cultures or adopting cultural neutrality. Though this strategy of cultural neutrality works to win elections for politicians, it distracts people from distinguishing and focusing to build their ethnic communities as contributing parts of a country.

Types of community in the modern times
With the indiscriminate use of the words ‘community’ and ‘culture’ to refer to various levels of groups and identities in the modern times, it becomes necessary to distinguish between the different possible types and stages of community. Therefore, communities can be grouped into three stages, namely, the natural or primary community, the physical or secondary community and the instrumental or tertiary community. This tertiary or instrumental community consists of three groups, which are professional, religious and ideological communities.

But on the other hand, if the person from a Yoruba town in Nigeria is living and working or even naturalized as citizen in another country like America, Australia, Canada, Russia, Spain or Egypt, he will be said to be living in a foreign residential community. So, a foreign residential community is a community outside one’s ethnic community that does not share a long-term political or national link with one’s own ethnic community. There, people are mainly related to each other as friends, neighbours, compatriots and other official connections. So, the prevalent way of life within a country as an alliance between several ethnic communities can be called national culture.

 The religious community is a distinction of people according to their specific faith and religious denominations, and is not automatically distinguishable, defined or based on a race, ethnicity, gender or physical location. In the modern times, most religious communities grow through preaching and conversion to a religious belief using any medium, and so, it connects people spiritually by their belief in a common deity or its ways of worship. Religious communities are organized to inspire devotions to specific deities and to influence people’s ways of life according to the religious doctrines. So, the prevalent way of life within different religions can be called religious cultures and traditions.

 The ideological community is a broad distinction of people according to their common ideas, beliefs and values about generalizable or universal social, economic or cultural practices in the world. They include cover groups like feminism, liberalism, Marxism, communism, socialism, capitalism, LGBTQ and other ideas that distinguish and unite people in the advocacy for general changes in various ethnic communities, residential communities or national policies, cultural beliefs, values or lifestyle. Like professional community, the ideological community rises from various people’s desire for change in a political or economic structure or belief, and is not automatically distinguishable, defined or limited to any race or ethnicity. So, people can identify with, or advocate to switch to or from any ideology they want and at any time. The different ideologies in this level of community spread by converting, training and supporting advocates of a particular ideology in and from different parts of the world. Ideological communities are easily portrayed as platforms for universal progress, since no community or nation can fully provide everything it needs. And the prevalent way of life that people follow based on ideologies is broadly to as ‘society’ (Western society, Eastern society, medieval society, modern society, African society, etc.), which loosely refers to an unspecified population, community, tribe or nation, swinging between ideologies. It is at this level of community that ideas are injected, transmitted or even imposed to modify, change or sustain intercommunal and international relations and socio-political reorganizations across personal, communal, racial, tribal, national and continental borders both for the rational aim of universal progress and the irrational aim of using rational ability or logic to focus on the animal and social needs.

These five stages of community have different sources and forms of influence in people. So, in their order of affection, the ethnic community is the basic, factual and fixed community because it genetically or ancestrally connects people to other people in a society. Despite the migrations and intercommunal evolutions within tribes, clans and ethnicities, the ethnic community remains the primary basis of cultural identity and destiny in the life of an individual. Even after death, the DNA from a person’s skeleton can be used to trace his possible community.

The residential community comes second as it connects people to others within a real or physical location, where they can collaborate with physical neighbours.

Though it is a more recent phenomenon than the ethnic and residential communities, the professional community comes third as it connects people to methods of working with human and natural resources for people to respond to their basic needs despite their location.

The religious community comes fourth as it connects people as individuals to supernatural beliefs to satisfy their need of interpreting and participating in the course of universal progress by relating with supernatural beings from their different locations.

Finally, the ideological community comes fifth as it connects people to generalized ideas in order to satisfy their rational need of participating in the course of universal progress through advocacy for collective changes in social organization and lifestyle.

Confusing the level of responsibility and influence to and from these different stages of community leads to various degrees of misunderstanding, violence, unproductivity and crises in various societies, especially underdeveloped parts of the world, where various ethnic communities were colonially joined together without consent or proper evolution. These kingdoms and communities were colonially merged as countries so that postcolonial officers can hold the communities for foreigners to extract their resources in exchange for foreign finished goods. So, some politicians embrace cultural neutrality and urge people to suppress the loyalty to their various ethnic communities in order to embrace the postcolonial identities and ideologies. They preach this cultural neutrality as a step away from tribalism and a way to tolerance for common humanity. However, this drive for cultural neutrality neutralizes the responsibility which people should have for developing their various ethnic communities by educating and enabling their people to be productive and socially responsible. Below is a structure for building the system of productivity beginning from one’s ethnic community to the state and national level. 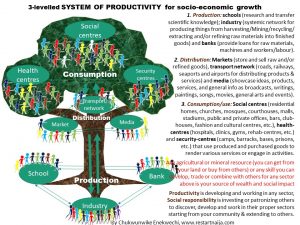 Presently, the highest obstacle to liberation of underdeveloped countries especially Africa, is not bad leaders, bad economy or citizens of developed societies. Instead, it is the underdeveloped people’s distraction from rallying to distinguish and build the roots of their various ethnic communities’ system of productivity before begging help from postcolonial regimes or foreign bodies. This is hoping that the postcolonial system that was made and imposed to dominate and exploit their communities are going to build their communities system of productivity. So, they continue to vote and wait in vain for various regimes or foreign agencies to build them.

For people to experience progress, especially in the underdeveloped societies, they need freedom to own and use their natural resources to produce and trade goods and services both locally and globally. This production begins at the ethnic community level when people retrieve access to their lands and resources in order to educate and motivate their people to create and trade goods and services. When various ethnic communities retrieve their resources, educate their people and engage them in industrial productivity, the various communities can then compete on the quality of their products and social responsibility, instead of competing on the amount of foreign products they can get and share from the colonial system of resource-exploitation.

So, our communal, ethnic or cultural differences must not be denied, distorted or blurred in the name of political correctness and superficial common nationality or humanity. Instead, it must be acknowledged, refined and integrated as the deepest source of individuation, variety, emotional strength, social passion, social identity and life’s ultimate purpose: the purpose of contributing to humanity’s progress by redeeming our specific communities and cultures from oblivion, unproductivity, irresponsibility or irrelevance. Not just absconding to attach ourselves to other people’s growth with the justification of being detribalized and under the illusion of global progress whenever our particular community is down, underdeveloped, unproductive or irresponsible.”

Finally, acknowledging people’s ethnic community as the primary community and integrating other levels of community (residential, professional, religious and ideological) in building their various ethnic communities is not hate speech, racism, tribalism, bigotry, supremacy, demonism or evil. It only becomes evil when people dominate, exploit and prevent other groups from developing their systems of growth in order to directly or indirectly benefit from their pain, loss, death or misery, or when a people refuse to support other ethnic communities to grow and compete in the eternal league of human development.